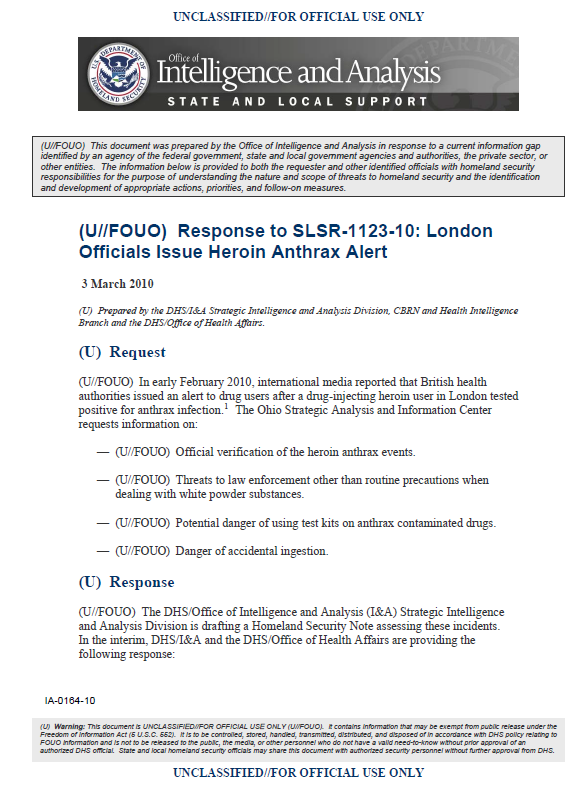 (U) On 5 February 2010, the UK Health Protection Agency (HPA)—an official British Government agency—announced the confirmation of one case in England of a heroin user testing positive for anthrax. HPA also said 19 cases of anthrax had been confirmed so far in Scotland and that the heroin, or a contaminated cutting agent mixed with the heroin, was the likely source of infection. The official notice and additional information are available on HPA’s Web site at:

(U) The European Centre for Disease Prevention and Control (ECDC), which monitors health in the European Union, said the investigations so far “strongly” suggested that all the cases had been infected by a common source. ECDC also said that “accidental contamination seems the most plausible explanation to these incidents.”

(U) Hazards to Law Enforcement

(U//FOUO) According to the HPA, the anthrax-contaminated heroin cannot be identified by appearance—the spores are too small to be seen by the human eye—and therefore all heroin has to be considered potentially dangerous.

(U//FOUO) Anthrax is a serious disease caused by Bacillus anthracis, a bacterium that forms spores. Anthrax infection can occur in three forms: cutaneous (skin), inhalation, and gastrointestinal. According to the U.S. Centers for Disease Control and Prevention (CDC), about 20 percent of untreated cases of cutaneous anthrax will result in death, inhalation anthrax is usually fatal, and intestinal anthrax results in death in 25 to 60 percent of cases.

(U) Personal Protective Equipment: Although not transmitted from person to person, infection could occur through contact with the contaminated drugs. To minimize the risk of infection, law enforcement and other first responders should use personal protective equipment recommended by CDC. Protective clothing and gloves are needed to prevent skin exposures, particularly because about 95 percent of anthrax infections are cutaneous.

(U) Decontamination: Law enforcement personnel should follow their local region’s anthrax decontamination procedures if they feel they have been contaminated. CDC recommends washing exposed skin with soap and water. According to CDC, equipment and clothing can be decontaminated using soap and water, and 0.5 percent hypochlorite solution (one part household bleach to 9 parts water) can be used on material that would not be damaged by bleach.

(U) Potential Danger of Using Test Kits on Anthrax-Contaminated Drugs: Determining whether heroin or other illicit drugs are contaminated with anthrax requires laboratory testing. Most state public health labs have the capacity to test for anthrax. Law enforcement personnel should contact their state public health lab to obtain proper protocols and procedures for sample collection and transportation to the laboratory for testing. CDC does not recommend the use of commercially available, hand-held assays for detection of Bacillus anthracis.

(U) Symptoms of Users Infected With Anthrax: The following symptoms may be indicators that a heroin user is infected with anthrax: swelling and redness, or abscess at the injection site (infection may look like a burn); flu-like illness (fever, muscle aches, malaise, cough, sore throat); gastrointestinal symptoms (nausea, vomiting, bloody diarrhea). Anthrax can also cause sepsis and meningitis—which are not readily apparent without medical advice. Symptoms of anthrax may vary according to the route of infection.

(U) Danger of Accidental Ingestion: Personal protective equipment may be used to prevent infection from exposure not only to aerosolized particles but also through accidental ingestion.