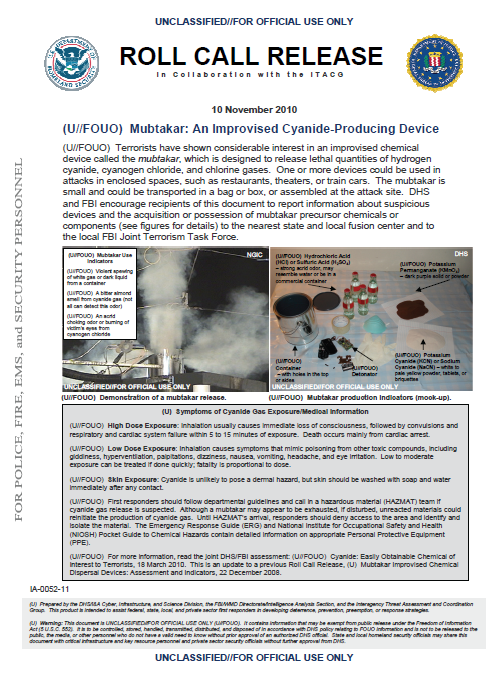 (U//FOUO) Terrorists have shown considerable interest in an improvised chemical device called the mubtakar, which is designed to release lethal quantities of hydrogen cyanide, cyanogen chloride, and chlorine gases. One or more devices could be used in attacks in enclosed spaces, such as restaurants, theaters, or train cars. The mubtakar is small and could be transported in a bag or box, or assembled at the attack site. DHS and FBI encourage recipients of this document to report information about suspicious devices and the acquisition or possession of mubtakar precursor chemicals or components (see figures for details) to the nearest state and local fusion center and to the local FBI Joint Terrorism Task Force.

(U//FOUO) Skin Exposure: Cyanide is unlikely to pose a dermal hazard, but skin should be washed with soap and water immediately after any contact.

(U//FOUO) First responders should follow departmental guidelines and call in a hazardous material (HAZMAT) team if cyanide gas release is suspected. Although a mubtakar may appear to be exhausted, if disturbed, unreacted materials could reinitiate the production of cyanide gas. Until HAZMAT’s arrival, responders should deny access to the area and identify and isolate the material. The Emergency Response Guide (ERG) and National Institute for Occupational Safety and Health (NIOSH) Pocket Guide to Chemical Hazards contain detailed information on appropriate Personal Protective Equipment (PPE).