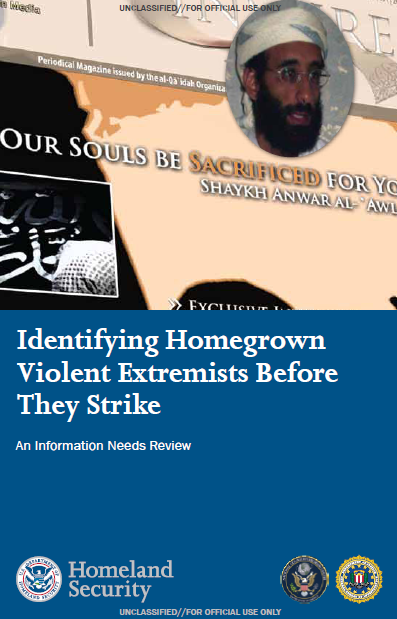 The attempted bombing in Times Square on 1 May 2010 highlights the need to identify Homegrown Violent Extremists before they carry out a terrorist act. The ability of the bomber to operate under the radar demonstrates the difficulties associated with identifying terrorist activity and reinforces the need for law enforcement, at all levels, to be vigilant and identify individuals who are planning violence or other illegal activities in support of terrorism.

A list of activities that might warrant reporting are listed below. Any one of these indicators of possible terrorist activity may be insignificant on its own, but when occurring with other indicators, particularly advocacy of violence, may provide a basis for reporting. In the course of official activities, and to the extent permitted by law, agencies are encouraged to forward to State and Local Fusion Centers, Joint Task Forces, and FBI Field Offices information on entities that are planning or committing acts of a suspicious nature, criminal or otherwise, that may indicate a potential threat to U.S. interests and warrant further investigation. This information should not be collected solely on First Amendment protected activities or on the basis of any racial, ethnic, religious, or other profile.

• New or increased advocacy of violence including providing material support or recruiting others to commit criminal acts.
• Adoption of new life styles and segregation from normal peer and family groups in association with advocating criminal or terrorist activity.
• The adoption of a new name.
• Behavior that could indicate participation in surveillance of potential targets.
• Acquisition of excessive quantities of weapons or materials that could be used to produce explosives such as ammonium nitrate-based fertilizers or hydrogen peroxide.
• Travel to or interest in traveling overseas to attend violent extremist institutions or paramilitary training camps.
• New or increased interest in Websites and reading materials that advocate violence and then initiating action in support of this activity.
• New or increased interest in critical infrastructure locations and landmarks, including obtaining aerial views of these locations.

Any reporting should include all of the information that factored into the decision to report the activities.

Note: DHS, FBI, and NCTC are not advocating interference with the rights of law-abiding citizens. There may be a legitimate reason why some of the indicators described in this document are present; it is up to you to determine when that is not the case. If you observe suspicious activities that warrant the attention of federal law enforcement entities, please contact your nearest State and Local Fusion Center and your local FBI Field Office or Joint Terrorism Task Force.