This appears to be a preliminary Draft version of a Joint FBI-DHS Bulletin released yesterday.  This version was made available by the Fraternal Order of Police. 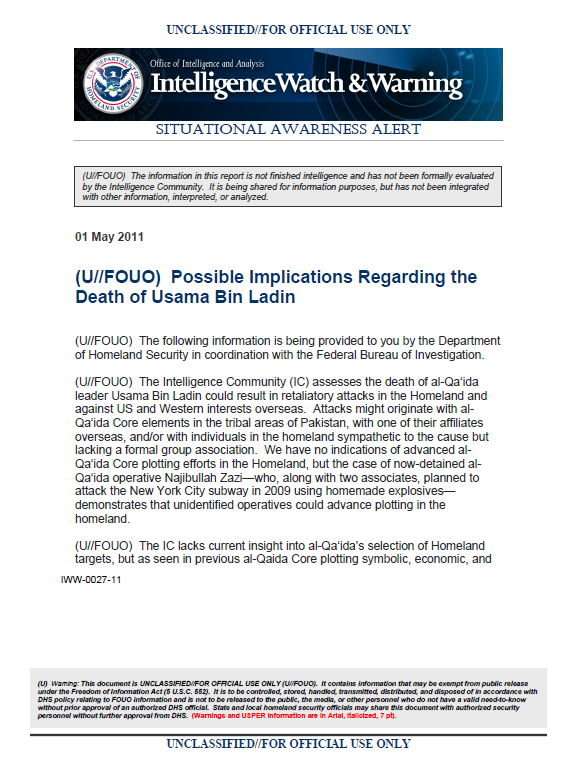 Possible Implications Regarding the Death of Usama Bin Ladin

(U//FOUO) The following information is being provided to you by the Department of Homeland Security in coordination with the Federal Bureau of Investigation.

(U//FOUO) The Intelligence Community (IC) assesses the death of al-Qa‘ida leader Usama Bin Ladin could result in retaliatory attacks in the Homeland and against US and Western interests overseas. Attacks might originate with al-Qa‘ida Core elements in the tribal areas of Pakistan, with one of their affiliates overseas, and/or with individuals in the homeland sympathetic to the cause but lacking a formal group association. We have no indications of advanced al-Qa‘ida Core plotting efforts in the Homeland, but the case of now-detained al-Qa‘ida operative Najibullah Zazi—who, along with two associates, planned to attack the New York City subway in 2009 using homemade explosives—demonstrates that unidentified operatives could advance plotting in the homeland.

(U//FOUO) The IC lacks current insight into al-Qa‘ida’s selection of Homeland targets, but as seen in previous al-Qaida Core plotting symbolic, economic, and transportation targets could be at risk. Small-arms attacks against soft targets, which could be perceived as more achievable than other types of attacks, cannot be ruled out.

(U//FOUO) Al-Qa‘ida affiliates may seek to accelerate plotting efforts in the Homeland, particularly al-Qa‘ida in the Arabian Peninsula (AQAP), which has attempted two Homeland attacks since December 2009. AQAP’s online magazine, Inspire, also provides encouragement and instructions for individuals in the Untied States to conduct attacks here without traveling overseas to receive training or support.

(U//FOUO) Bin Ladin’s death may provide justification for radicalized individuals in the United States to rapidly mobilize for attacks here. Although soft targets will—as they have in the past—remain attractive to homegrown extremist, official targets such as government installations, military personnel and facilities, and senior government officials may gain greater prominence.

(U//FOUO) Overseas, the strongest reaction is expected to be in South Asia but will likely occur to differing degrees worldwide, including Europe. Other high-risk regions include those where al-Qa‘ida’s affiliates and allies have operational strongholds, including the Middle East, Africa, and Southeast Asia.

(U//FOUO) IWW will continue to monitor these events and will provide more information as it becomes available.