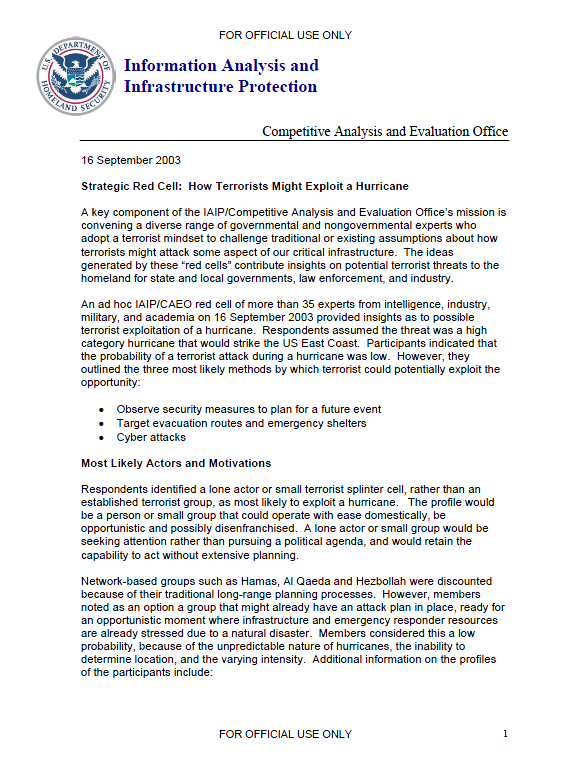 A key component of the IAIP/Competitive Analysis and Evaluation Office’s mission is convening a diverse range of governmental and nongovernmental experts who adopt a terrorist mindset to challenge traditional or existing assumptions about how terrorists might attack some aspect of our critical infrastructure. The ideas generated by these “red cells” contribute insights on potential terrorist threats to the homeland for state and local governments, law enforcement, and industry.

An ad hoc IAIP/CAEO red cell of more than 35 experts from intelligence, industry, military, and academia on 16 September 2003 provided insights as to possible terrorist exploitation of a hurricane. Respondents assumed the threat was a high category hurricane that would strike the US East Coast. Participants indicated that the probability of a terrorist attack during a hurricane was low. However, they outlined the three most likely methods by which terrorist could potentially exploit the opportunity:
• Observe security measures to plan for a future event
• Target evacuation routes and emergency shelters
• Cyber attacks

Most Likely Actors and Motivations

Respondents identified a lone actor or small terrorist splinter cell, rather than an established terrorist group, as most likely to exploit a hurricane. The profile would be a person or small group that could operate with ease domestically, be opportunistic and possibly disenfranchised. A lone actor or small group would be seeking attention rather than pursuing a political agenda, and would retain the capability to act without extensive planning.
Network-based groups such as Hamas, Al Qaeda and Hezbollah were discounted because of their traditional long-range planning processes. However, members noted as an option a group that might already have an attack plan in place, ready for an opportunistic moment where infrastructure and emergency responder resources are already stressed due to a natural disaster. Members considered this a low probability, because of the unpredictable nature of hurricanes, the inability to determine location, and the varying intensity. Additional information on the profiles of the participants include:

• Religious extremist groups may seek to leverage the natural disaster as a sign from God and take it as a signal to attack. Washington D.C. being the target of a major disaster could be interpreted as a sign of God condemning the United States.
• The Y2K event provides historical evidence of terrorist groups trying to exploit circumstances that threatened infrastructures and may provide a planning precedent. Terrorists unsuccessfully planned to capitalize on the resulting confusion and chaos if Y2K had created panic or destabilization in the United States.

Threats and the Hurricane Lifecycle

Red Cell respondents examined vulnerabilities that might arise during the life cycle of a hurricane, as well as potential threats to exploit these vulnerabilities. The hurricane lifecycle was divided into three components: pre-event, during, and post-event. Physical threats during the event were considered highly unlikely, due to the logistical complexities involved in preparing and mobilizing assets in extreme weather. However, participants noted that a natural disaster could be used as a diversion or a way to capitalize on the concentration of Federal resources in one area of the country while an attack is staged. A cyber attack could be utilized throughout the hurricane life cycle to cause increased confusion and panic while avoiding the logistical issues of mounting an operation in an unstable environment. The following chart breaks down each threat, impact and vulnerability identified by red cell respondents.