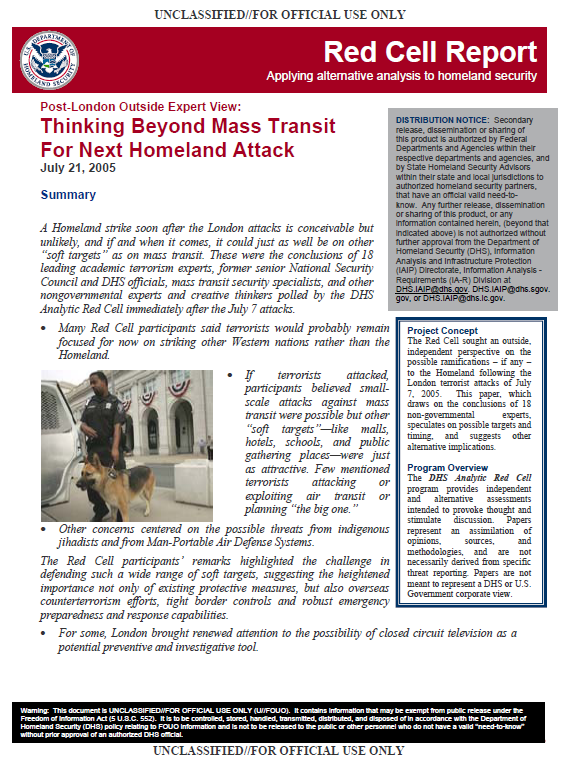 A Homeland strike soon after the London attacks is conceivable but unlikely, and if and when it comes, it could just as well be on other “soft targets” as on mass transit. These were the conclusions of 18 leading academic terrorism experts, former senior National Security Council and DHS officials, mass transit security specialists, and other nongovernmental experts and creative thinkers polled by the DHS Analytic Red Cell immediately after the July 7 attacks.

• Many Red Cell participants said terrorists would probably remain focused for now on striking other Western nations rather than the Homeland.

• Other concerns centered on the possible threats from indigenous jihadists and from Man-Portable Air Defense Systems.

The Red Cell participants’ remarks highlighted the challenge in defending such a wide range of soft targets, suggesting the heightened importance not only of existing protective measures, but also overseas counterterrorism efforts, tight border controls and robust emergency preparedness and response capabilities.

• For some, London brought renewed attention to the possibility of closed circuit television as a potential preventive and investigative tool.

Concern Over Future Homeland Attack, But Attack No More Likely Than Before

The participants showed concern over prospects for a future jihadist attack against the Homeland, but did not maintain that such an attack was any more likely as a result of the London bombings.

• According to some, the attack was an “ominous” reminder of the continued operational capabilities of Islamic jihadists. Terrorists’ long-term goals for attacking the Homeland remain steadfast, and their planning for attacks against the Homeland may even be under way. One Red Cell participant said the London attacks “countered the perception that terrorists are running scared.”

• Some expressed concern about the increased risk of copy-cat attacks against the Homeland by individual jihadists or sympathetic groups. The London attacks likely would inspire and empower others to continue planning.

Red Cell participants largely believed that, while al-Qaida (AQ) leaders were likely engaged in long-term planning for an attack on the United States, most jihadists were focused on striking targets in Western Europe—with it being “London’s turn” last week.

• Some speculated that AQ leadership remains interested in large-scale “grandiose” attacks in the United States, but has delegated operational authority to local cells willing to engage in less spectacular attacks that put pressure on U.S. allies in the war in Iraq.

• Others pointed out how the attacks coincided with a unique event—the G-8 summit—and were likely meant to send a signal to the United Kingdom regarding cooperation with the United States. (See Red Cell Report, “The G-8 Summit: An Opportune Time for a Terrorist Attack?” of May 14, 2004)

Mass Transit Systems Are a Target . . .

Participants showed heightened concern that the London attack, like the Madrid attack before it, signals that mass transit in the Homeland is a potential target. Additionally, they viewed attacks during rush hour as most likely to cause panic and economic disruption.

• Trains, buses, subways and their supporting infrastructure, such as platforms and stations, were identified as the most likely targets. Major metropolitan areas were of particular concern.

. . . But Other Soft Targets Remain Attractive

Participants, however, were nearly unanimous in their belief that London showed that AQ related elements might seek to attack a broader range of homeland soft targets than just mass transit. They also consistently suggested terrorists might prefer major urban areas for soft target selection, though some opined that attacks on the heartland also would be devastating.

• Shopping malls, hotels, convention centers, and other economic targets with retail themes were frequently identified because of their high population densities and lesser security measures. Schools and even police stations also were noted for their shock value.

• Participants also said that terrorists would consider many other targets that generate large gatherings, such as national monuments or theme parks.

• Most respondents shied away from the air transportation infrastructure because, as one said, there were simply “too many checks” at airports for a prospective attacker to overcome.