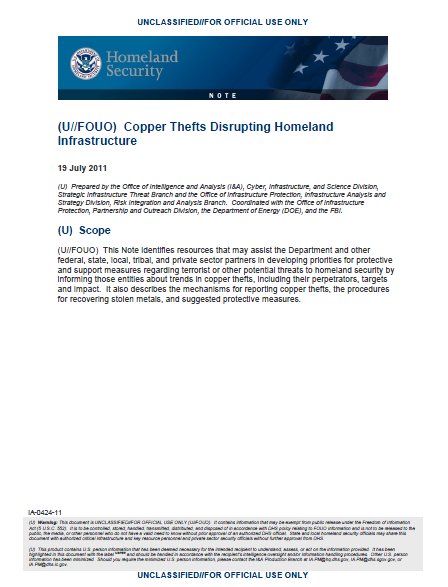 (U//FOUO) Reported copper thefts from critical infrastructure and key resource (CIKR) sectors in the United States rose at least 50 percent in 2010 compared to the previous year, largely driven by record-high prices for copper.

(U//FOUO) Individuals and criminal organizations have engaged in copper thefts primarily for financial gain. We have seen no indication that terrorists are using copper thefts in the homeland as a tactic to damage or destroy CIKR facilities or to fund terrorist activity.

(U//FOUO) Scrap copper prices remain well above historic levels, reaching an all-time high of $4.63 per pound in mid-February 2011, primarily due to growing demand from developing countries. The upward trend in thefts of copper components from CIKR sectors generally tracks increases in copper prices (see Figure 1). Theft levels in 2011 are likely to exceed 2010 levels, but mitigation efforts by states and the private sector probably mean they will not reach the record levels seen in 2008.

(U//FOUO) The most lucrative and highly targeted CIKR sectors are the energy, transportation, commercial facilities, communications, agriculture and food, dams, and water sectors. Criminal elements are drawn to these sectors because of the large amount of copper components they use and the lack of security measures to inhibit theft. Other targets include schools, religious institutions, and vacant homes.

— (U//FOUO) Thieves mostly target remote sites where they are unlikely to be seen or require special access. These include construction sites, foreclosed homes, irrigation pumps, and power lines.

(U//FOUO) Law enforcement agencies have noted that some illicit drug users fund their habits by stealing copper. Other perpetrators include current and former industry employees with insider knowledge or individuals who use deceptive techniques, such as posing as employees, to gain access to restricted areas.

— (U) In March 2011, a security guard at the Port of Houston was arrested for allowing his friends and family access to the port, where they allegedly stole over 22,000 pounds of copper transiting the facility.

— (U//FOUO) In October 2008, thieves in Florida posed as utility workers—using vehicles painted with utility-service logos and wearing utility company uniforms—to access manholes to steal copper from underneath city streets. They stole copper cables worth over $1 million before being arrested.

(U//FOUO) The theft of copper can disrupt electricity and communications and impede the response time of emergency services. Copper theft also can cause significant property damage. The cost to replace stolen components can be considerably greater than the value of the stolen copper parts themselves. According to a 2007 DOE estimate, US electrical utilities spend almost $1 billion per year on repairs and to fix disruptions caused by copper wire theft.

— (U) From January 2011 to June 2011, thieves in northern California knocked down 300 power poles to steal copper wiring from within and on the poles.
— (U) In February 2011, five separate thefts of copper from telephone cables in southwest Virginia disrupted phone service to over 1,000 residents for up to a day.
— (U//FOUO) In December 2010, over 4,000 Louisiana homes and businesses lost power after a copper theft at an electricity substation created a system overload, forcing the system to shut down.
— (U//FOUO) In November 2010, a series of copper thefts from radio transmission towers near Houston, Texas prevented emergency-service dispatchers from communicating with firefighters and paramedics for nearly an hour.

(U) Metal theft databases offer a tool for law enforcement, CIKR owners and operators, and scrap dealers to share information.

— (U) The Institute of Scrap Recycling Industries (ISRI)USPER trade association launched a Web site (www.ScrapTheftAlert.com) for victims and law enforcement to report copper thefts. The ISRI Web site covers multiple precious metals, not just copper. To verify the legitimacy of scrap copper before purchase, scrap-metal dealers can search for thefts that have occurred in their area. Scrap-metal dealers can also subscribe to automatically receive reports of thefts that have occurred within a 100-mile radius. 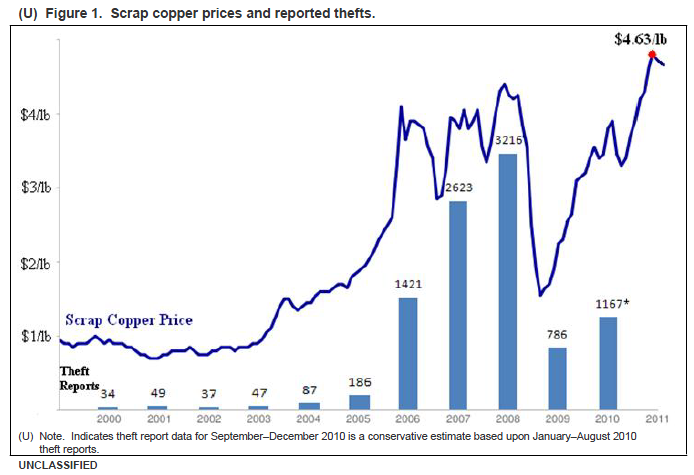