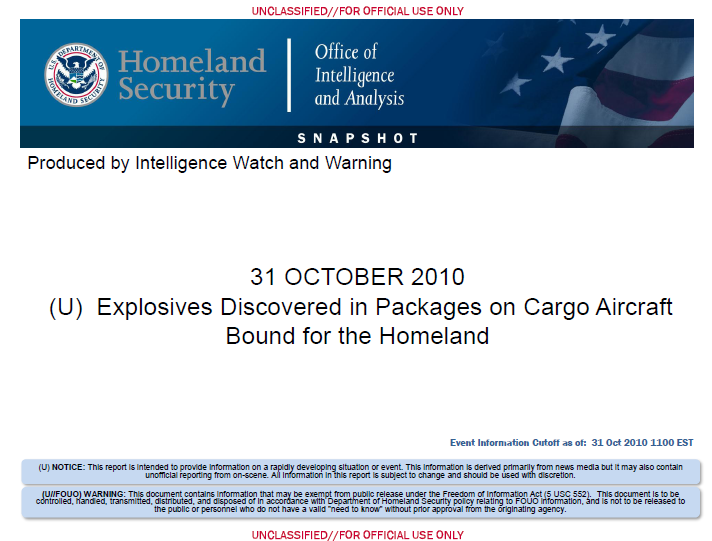 (U) Explosives Discovered on Cargo Aircraft Bound for the United States

(U) As of 29 October, packages on cargo aircraft containing explosive materials were intercepted in the United Kingdom (UK) and Dubai, United Arab Emirates (UAE). The packages were shipped from Yemen, with the United States listed as the final destination.

(U) On the evening of 28 October,security officials atEast Midlands Airport in Lockington, UK identified a suspicious package containing a modified printer-toner cartridge that was later confirmed to contain explosives.

(U) Authorities in Dubai discovered a similar package also containing a modified printer-toner cartridge. Subsequent screening of the contents confirmed the presence of explosive materials.

(U) Both packages were shipped to likely fictitious individuals at addresses formerly associated with Jewish synagogues in the Chicago area.The sender may be an individual associated with the Yemen American Institute [for] Languages-Computer-Management (YAI)or the American Center for Training and Development (ACT).

(U) U.S. cargo planes in Philadelphia and Newark and a cargo delivery truck in New York City were searched because they were carrying cargo from Yemen. In addition, a passenger aircraft from Dubai to New York City was escorted by U.S. and Canadian fighter jets to John F. Kennedy International Airport because it also contained cargo from Yemen. No explosives were discovered on any searches conducted in the United States.

(U) Tactics & Techniques:
–(U) Both packages were shipped from Yemen and contained modified computer printer components. White explosive powder was concealed in the ink toner cartridges.
–(U) Both devices were shipped on U.S.-bound cargo planes to addresses formerly associated with Jewish synagogues in the Chicago, Illinois area.

(U) Group Capability and Intent:
–(U) On 30 October, Dubai-based Al-ArabiyahTelevision reported that a source at the UAE General Civil Aviation Authority indicated that al-Qa‘idain the Arabian Peninsula (AQAP) —a group designated as a terrorist organization by the U.S. Department of State—is likely responsible for shipping the explosives laden packages. The U.S. government and our foreign partners are continuing to investigate the attempt attack.
–(U) AQAP has demonstrated a continued interest in attacks against aviation and targets in the Homeland. On 25 December 2009, AQAP operative UmarFarouk Abdulmutallabattempted to detonate an explosive device while on board Northwest Airlines Flight 253. Also, AQAP ‘s public messaging, to include the online English-language magazine Inspire, has repeatedly called for its followers to conduct independent attacks in the West.

(U) AQAP is a terrorist organization claiming allegiance to UsamaBin Laden’s al-Qa‘ida.

(U) Area of Operations: Primarily Yemen and Saudi Arabia; however, AQAP possesses aspirations to carry out additional attacks in Western nations.

(U) Main Objectives: AQAP’s goals are generally considered to be aligned with those of core al-Qa‘ida: expel “Zionist crusaders” from historically Muslim lands, attack Western nations, and replace “apostate” governments that it views as being illegitimate, such as the Yemeni government.

(U) TTP / MO: AQAP conducts guerilla attacks using both conventional and unconventional means, such as small arms attacks against security patrols and government installations and the use of improvised explosive device suicide attacks against political figures.

(U) AQAP formed in January 2009 when al-Qa‘idaelements in Yemen and Saudi Arabia merged after the September 2008 al-Qa‘ida attack against the U.S. Embassy in Sanaa, which killed 16 civilians.

(U)On 25 December 2009, AQAP claimed responsibility for the attempted attack on Detroit-bound Northwest Airlines Flight 253 in which UmarFarouk Abdulmutallabattempted to detonate a device sewn into his clothes while onboard.

(U) On 11 July 2010, AQAP disseminated the first edition of the online English-language magazine Inspire, with the second edition disseminating on 11 October. The magazine provides technical instruction on building bombs, selecting targets, and ensuring operational security.

(U) Homeland Implications: AQAP will remain a resilient foe that will likely continue to adapt it tactics based upon lessons learned from previous successful and failed attacks. The group also continues to demonstrate an interest in recruiting operatives from Western countries and inspiring independent attacks in the Homeland.

–(U) Suspicious packages or letters received by a carrier that might contain explosives or Chemical, Biological or Radiological agents may have the following characteristics:
–(U) Indications of liquids/powder leaking from the package
–(U) Unusual odors
–(U) Lopsided or uneven shape
–(U) Sealed with excessive tape
–(U) Mailed with excessive postage
–(U) Addresses misspelled or containing only titles of recipient.
–(U) Use of incorrect titles
–(U) Poorly or illegibly typed or written addresses
–(U) Restrictive markings destined for a specific, high-profile person.
–(U) No return address
–(U) Unexpected packages mailed from outside the United States
–(U) DHS has put in place additional aviation and cargo screening measures, and is working closely with our Federal, state, local, international and private sector partners to identify suspicious activities, individuals and cargo packages.
–(U) DHS also highlights the need for continued awareness and vigilance, and encourages state and local authorities to emphasizethe “If you see something, say something” campaign in their local communities.