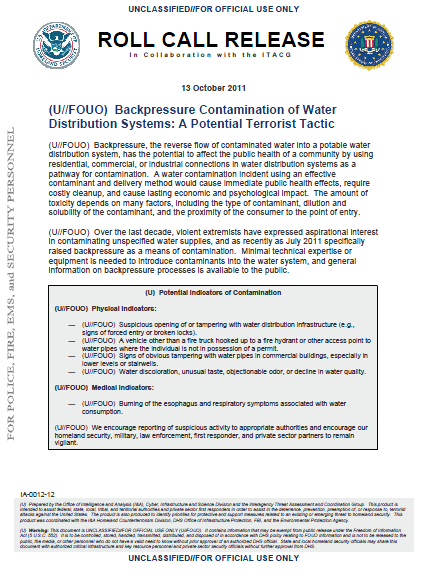 (U//FOUO) Backpressure, the reverse flow of contaminated water into a potable water distribution system, has the potential to affect the public health of a community by using residential, commercial, or industrial connections in water distribution systems as a pathway for contamination. A water contamination incident using an effective contaminant and delivery method would cause immediate public health effects, require costly cleanup, and cause lasting economic and psychological impact. The amount of toxicity depends on many factors, including the type of contaminant, dilution and solubility of the contaminant, and the proximity of the consumer to the point of entry.

(U//FOUO) Over the last decade, violent extremists have expressed aspirational interest in contaminating unspecified water supplies, and as recently as July 2011 specifically raised backpressure as a means of contamination. Minimal technical expertise or equipment is needed to introduce contaminants into the water system, and general information on backpressure processes is available to the public.

(U) Potential Indicators of Contamination

— (U//FOUO) Suspicious opening of or tampering with water distribution infrastructure (e.g., signs of forced entry or broken locks).
— (U//FOUO) A vehicle other than a fire truck hooked up to a fire hydrant or other access point to water pipes where the individual is not in possession of a permit.
— (U//FOUO) Signs of obvious tampering with water pipes in commercial buildings, especially in lower levels or stairwells.
— (U//FOUO) Water discoloration, unusual taste, objectionable odor, or decline in water quality.

— (U//FOUO) Burning of the esophagus and respiratory symptoms associated with water consumption.