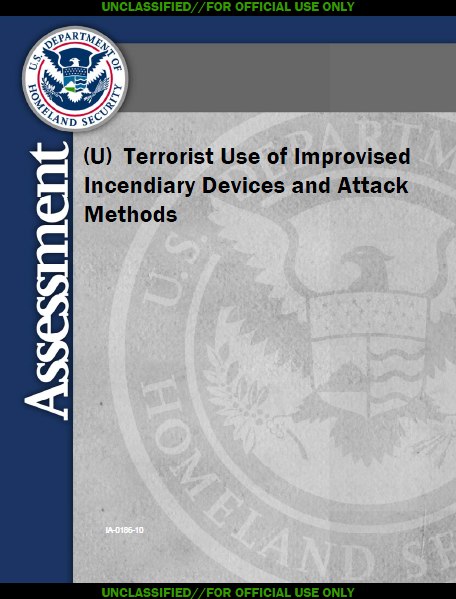 (U//FOUO) IIDs can be used against many types of infrastructure targets; violent extremists have used them successfully in attacks in the United States and overseas.

(U//FOUO) The DHS/Office of Intelligence and Analysis (I&A) has no credible or specific intelligence indicating current terrorist attack planning featuring use of IIDs against infrastructure in the United States. The ease with which IIDs can be constructed and used, however, makes it difficult to detect and prevent such attacks.

(U) Improvised Incendiary Devices Can Be Constructed from Common Materials

(U//FOUO) An IID consists of an ignition source, a flammable or combustible fuel —including kerosene, cigarette and charcoal lighter fluid, motor fuels, such as gasoline or diesel, and reactive chemicals—and some type of container, such as propane cylinders, plastic pipes, bottles, and cans. IIDs range in sophistication from very simple and easily-constructed Molotov cocktails—which are made by filling a glass bottle with fuel and lighting a rag placed in the top—to more complicated timed devices consisting of a sodium and acid mixture.

(U//FOUO) The accessibility of many types of infrastructure, such as government facilities, national monuments, various transportation and energy assets, and commercial facilities, make them susceptible to IID attacks. Passenger trains, ferries, and other public conveyances are among the more attractive targets for terrorists because they often have large numbers of people enclosed in concentrated areas that are difficult to evacuate rapidly.

(U) Previous Use of Improvised Incendiary Devices in the United States

(U) Terrorists using IIDs achieved their most notable success in a February 2007 attack by Kashmiri operatives who placed six suitcase IIDs in three cars of the “Friendship Express” passenger train traveling from India to Pakistan. Four of the six IIDs ignited, causing fires in two passenger cars that killed 68 people and injured 13. Other incidents, like those in the United States, have achieved mixed results.

— (U) In May 2008, an ethnic Uighur woman aboard a domestic flight bound for Beijing, China attempted to ignite a flammable liquid in a beverage can. She aroused suspicions when she exited the lavatory to pick up a second can after the first failed to ignite and produced a smell of gasoline.

— (U) In June 2007, two men drove a burning jeep with several gasoline-filled containers into the main terminal building at the Glasgow, Scotland airport, causing structural damage to the front of the building but no casualties.

— (U) In July 2006, two men plotted to attack two trains in Germany using suitcases filled with butane and gasoline, but the devices failed to ignite. German prosecutors claimed, however, that the trains would have become “balls of fire” had the IIDs functioned as planned.