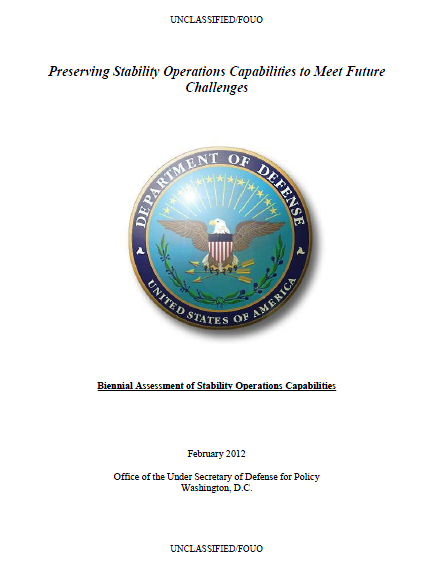 This report provides an assessment of Department of Defense (DoD) efforts over the past two years to implement requirements set forth in the 2009 DoD Instruction 3000.05, Stability Operations. It highlights significant initiatives currently underway or planned throughout DoD and provides recommendations and key findings to achieve further progress.

The overarching theme of the report is that the Department must learn from previous hard-won experience in stability operations and institutionalize, enhance, and evolve the lessons learned and capabilities acquired by the U.S. military for current and future operations. As part of a risk -balanced strategy, one ofthe Pentagon’s top priorities should be to prepare for the predominant sources of conflict in the 21 5t Century, specifically fragile states and the irregular challenges that they spawn. Even if we anticipate participating more selectively in these operations in the future, the U.S. military should capitalize on the adaptation in thinking that occurred as a result of the experiences in Afghanistan and Iraq by preserving perishable expertise, and retaining key capabilities and the appropriate skill sets for these operations.

As U.S. defense strategy shifts from an emphasis on today’s wars to preparing for future challenges, the task of promoting stability in a volatile strategic environment remains one of our Nation’s top concerns. Emphasizing more effective non-military means and military-to-military cooperation can help to prevent instability from triggering conflicts, thereby reducing demand for large-scale stability operations aimed at bringing such conflicts to closure. As part of a prudent down-sizing of our posture, the U.S. military must be able to retain otherwise perishable skills, expertise and specialized capabilities acquired as a consequence of its hard-won experiences in Iraq and Afghanistan. Retaining these capabilities requires an enduring investment in people, the wherewithal to institutionalize lessons learned, and the retention of forces that can be quickly regenerated to meet future demands.

The Department of Defense (DoD) has taken positive steps since 2009 toward enhancing its stability operations capabilities. Joint doctrine is now on a firmer foundation; the Services have strengthened relevant proficiencies at the unit level; and investments in civil-military planning, exercising, field-level coordination and capacity-building are noteworthy. Even so, these gains are ad hoc and temporary for the most part and will be fleeting unless affirmative steps are taken to preserve stability operations capabilities in the years ahead.

To help achieve this goal, this report recommends the following specific steps:

• DoD should continue to emphasize stability operations as a core military capability in all of its key policy and strategy documents.
• DoD should continue to make refinements to existing doctrine as new lessons emerge and develop a process to fast-track doctrine that absorbs these lessons based on operational necessities.
• DoD should persist in its efforts to translate such lessons into stability operations-related training and education at all levels. To help sustain civil-military training capacities, it should consider ways of incentivizing U.S. whole-of-government training and exercises, possibly through a pooled funding approach. It could also consider combining multiple exercises into a single capstone event focused on interagency integration.
• In close coordination with interagency partners, DoD should mitigate the negative effects of predictable gaps in civilian capacity in uncertain and hostile operational environments by continuing to place emphasis upon preparing U.S. military forces for likely stability operations tasks. We should continue to advocate for increased civilian agency capacity and resources, while also promoting the development of civilian-military capacity of allies and other partners to address stability operations and related activities.
• As defense resources shift back from contingency funding to our base budget, DoD should continue to work with Department of State, interagency partners and the Congress to review the adequacy of legal authorities and funding for the full range of security assistance and coalition support programs requiring coordinated defense, diplomacy, and development efforts in the stability operations arena. Specifically, the Congressionally-mandated annual review of the Global Security Contingency Fund execution, and other resultant lessons learned documents, could help in mapping out possible legislative changes and in recommending interagency planning process improvements.