(U//FOUO) FBI Indicators for Terrorist Use of Toxic Industrial Chemicals 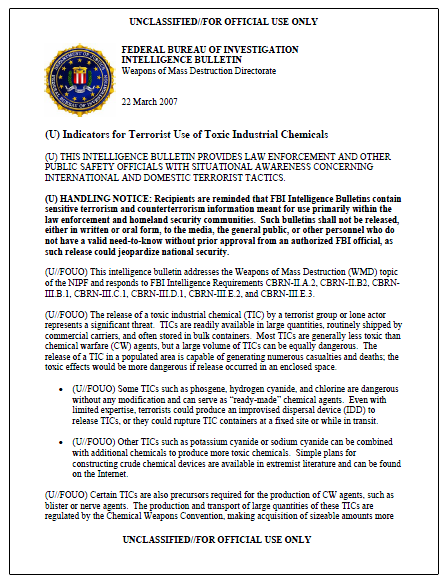 (U//FOUO) The release of a toxic industrial chemical (TIC) by a terrorist group or lone actor represents a significant threat. TICs are readily available in large quantities, routinely shipped by commercial carriers, and often stored in bulk containers. Most TICs are generally less toxic than chemical warfare (CW) agents, but a large volume of TICs can be equally dangerous. The release of a TIC in a populated area is capable of generating numerous casualties and deaths; the toxic effects would be more dangerous if release occurred in an enclosed space.

• (U//FOUO) Some TICs such as phosgene, hydrogen cyanide, and chlorine are dangerous without any modification and can serve as “ready-made” chemical agents. Even with limited expertise, terrorists could produce an improvised dispersal device (IDD) to release TICs, or they could rupture TIC containers at a fixed site or while in transit.
• (U//FOUO) Other TICs such as potassium cyanide or sodium cyanide can be combined with additional chemicals to produce more toxic chemicals. Simple plans for constructing crude chemical devices are available in extremist literature and can be found on the Internet.

The following TICs present a high risk because they can be used as improvised chemical weapons, combined to form more toxic chemicals, or used as precursors for CW agents: