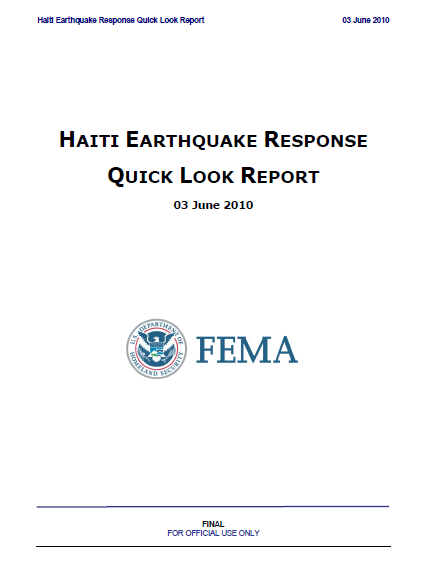 On Tuesday, January 12, 2010, at 4:53 p.m. Eastern Standard Time (EST), an earthquake with a 7.0 magnitude occurred in the Atlantic Ocean approximately 15 miles southwest of Port-au-Prince, Haiti. The nation suffered massive damage in Port-au-Prince and in numerous other towns and cities. According to the Government of Haiti, the earthquake collapsed 100,000 structures and damaged another 200,000 across Haiti, resulting in over 220,000 deaths, 300,000 injuries, and 1.1 million displaced people.

FEMA negotiated an Interagency Agreement (IAA) with USAID to facilitate support to response operations. FEMA activated the National Response Coordination Center (NRCC) and deployed liaisons to other agencies’ operations centers to help coordinate the multi-agency relief effort. FEMA also activated eight Urban Search and Rescue (US&R) task forces and deployed four to Haiti to conduct search and rescue operations. These 4 task forces, combined with 2 task forces activated by USAID, were responsible for 47 of 134 live rescues in Haiti. The national US&R system includes 28 task forces, 2 of which have agreements with both FEMA and USAID (CA-TF2 and VA-TF1). In order to serve in foreign disasters, task forces must meet additional requirements identified by USAID. This report refers to task forces as either FEMA US&R or USAID Search and Rescue (SAR) depending on the activating agency.

This Quick Look Report identifies the following as primary areas for improvement that were demonstrated during the response to the Haiti earthquake: