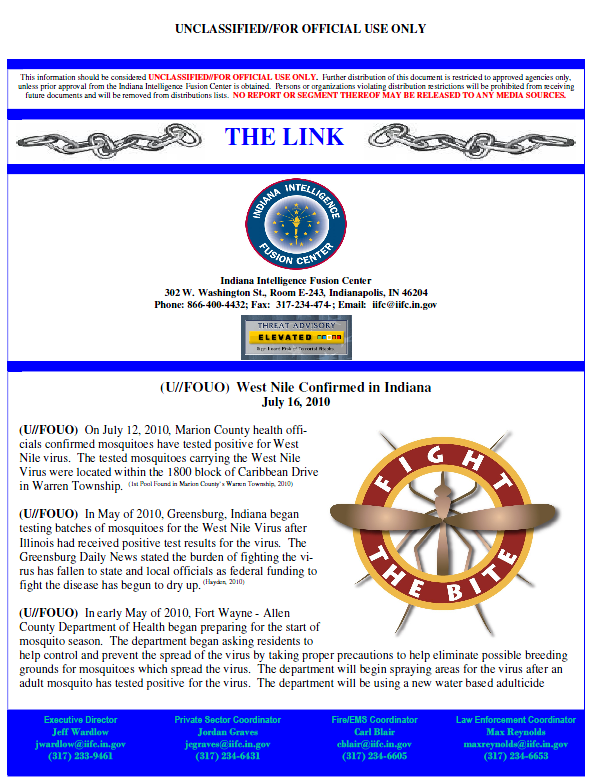 (U//FOUO) In May of 2010, Greensburg, Indiana began testing batches of mosquitoes for the West Nile Virus after Illinois had received positive test results for the virus. The Greensburg Daily News stated the burden of fighting the virus has fallen to state and local officials as federal funding to fight the disease has begun to dry up. (Hayden, 2010)

(U//FOUO) In early May of 2010, Fort Wayne – Allen County Department of Health began preparing for the start of mosquito season. The department began asking residents to help control and prevent the spread of the virus by taking proper precautions to help eliminate possible breeding grounds for mosquitoes which spread the virus. The department will begin spraying areas for the virus after an adult mosquito has tested positive for the virus. The department will be using a new water based adulticide known as AquaAnvil and will spray a 1/2 mile radius around the site of the infected area. The health department is also providing residents with mosquito-eating fish. The minnows are a popular way to reduce mosquito larvae in backyard garden pools and ornamental ponds. The minnows however may not be released into creeks, lakes, rivers, or other natural waterways where Indiana game fish may be present. (Verbatim: Mosquito, West Nile season begins, 2010)

(U//FOUO) What is West Nile Virus?

(U//FOUO) West Nile Virus is a serious disease that is believed to be a seasonal epidemic in North America. The disease is known to be active within the months of summer and fall and is most often spread by the bite of an infected mosquito. (West Nile Virus: What You Need to Know, 2010)

(U//FOUO) Approximately 150 individuals infected with West Nile Virus will develop a severe illness. Severe symptoms include, but are not limited to, high fevers, neck stiffness, disorientation, convulsions, muscle weakness, vision loss, numbness and paralysis, coma, and headaches. The symptoms may last for several weeks and some may become permanent. (West Nile Virus: What You Need to Know, 2010)

(U//FOUO) Milder symptoms, which affect up to 20 percent of individuals, may include fever, nausea, vomiting, body and head aches. Symptoms may last for a few days and contain a skin rash or swollen lymph glands. It is important to note however that approximately 80 percent of individuals who are infected with West Nile Virus do not present any signs or symptoms. (West Nile Virus: What You Need to Know, 2010)

(U//FOUO) Being outdoors means that you could become a risk to the West Nile Virus. Taking precautions such as dumping polluted water from a sewer or septic system, emptying the gutters to your home, and ensuring that standing water has been eliminated from your premises is just one of the ways to ensure that mosquitoes are unable to populate on your property.

(U//FOUO) Additional preventative methods include wearing insect repellent when outdoors, staying indoors at dusk and dawn (when mosquitoes are most active), ensuring the screens on your doors and windows are able to keep mosquitoes out, and by getting rid of mosquitoes breeding sites. (West Nile Virus: What You Need to Know, 2010)