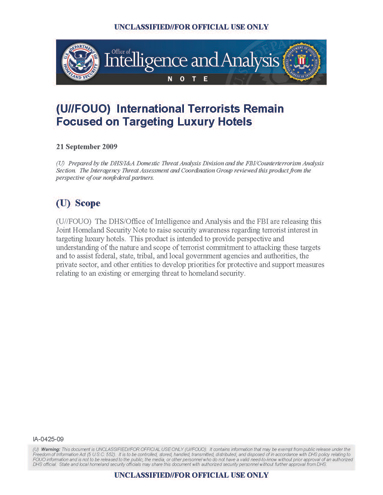 (U//FOUO) The DHS/Office of Intelligence and Analysis and the FBI are releasing this Joint Homeland Security Note to raise security awareness regarding terrorist interest in targeting luxury hotels. This product is intended to provide perspective and understanding of the nature and scope of terrorist commitment to attacking these targets and to assist federal, state, tribal, and local government agencies and authorities, the private sector, and other entities to develop priorities for protective and support measures relating to an existing or emerging threat to homeland security.

(U//FOUO) Hotels are attractive targets for terrorists because of the substantial number of people present to include VIPs and tourists. Hotels generally lack the robust perimeter security necessary to prevent access by terrorists, and regular delivery of products and services offer venues or opportunities to penetrate protective measures. The DHS/Office of Intelligence and Analysis (I&A) and the FBI are not aware of any threat to luxury hotels in the United States, but analysis of historical reporting, previous attacks abroad, and thwarted plots provide some insight into the tactics used by terrorists against hotels.

— (U//FOUO) At least two suicide attackers posing as guests used improvised explosive devises (IEDs) to attack luxury hotels in Jakarta, Indonesia on 17 July 2009. They reportedly checked into a room two days before the attack and possibly received assistance from a hotel vendor.

— (U//FOUO) A small group of attackers used a combination of small arms and two vehicles, one packed with explosives, to attack a luxury hotel in Peshawar, Pakistan on 9 June 2009. The hotel’s security cameras show a sedan entering the hotel’s entry control point and guards opening the gate. Gunmen in the vehicle then fired at the guards, allowing both the sedan and a trailing vehicle loaded with
explosives to enter the compound, where the explosives were detonated.

— (U//FOUO) On 20 September 2008, a terrorist, unable to breach the security perimeter, detonated a vehicle-borne improvised explosive device (VBIED) at the entry control point of a luxury hotel in Islamabad, Pakistan.

— (U//FOUO) Taliban militants, some disguised in police uniforms, attacked a hotel in Kabul, Afghanistan using small arms, grenades, IEDs and a VBIED on 14 January 2008. One of the terrorists detonated a suicide vest inside the hotel while others attacked guards outside the compound and detonated a VBIED outside the hotel. Three attackers gained entry to the hotel and used small arms and grenades against hotel guests and employees.

— (U//FOUO) Paramilitary and “Small Unit” Tactics: The group of 10 Mumbai attackers used small arms, such as assault rifles and pistols, to defeat perimeter security, defend themselves, maximize casualties, and prolong the siege.

— (U//FOUO) Explosives: The hotel attacks have included the use of explosives carried or placed by individuals or planted in vehicles. Explosives serve as a force multiplier for terrorists, affording greater damage to infrastructure and higher casualties and deaths—often timed to hit first responders on the scene.

– (U//FOUO) IEDs: The Jarkarta attackers used IEDs to specifically target a group of businessmen meeting in the hotel restaurant. In the Mumbai attacks, IEDs were used to prevent first responders from gaining access to the hotel.

– (U//FOUO) VBIEDs: In the 2008 Islamabad attack, a single VBIED with one driver was unable to breach the entry gate before the explosive detonated. Subsequent hotel attacks incorporated a second car or multiple attackers to help the VBIED penetrate security. For example, the 2009 Peshawar hotel attack employed a lead vehicle with attackers carrying small arms and a trailing VBIED.

(U//FOUO) Owners of commercial facilities have the capability to protect against many of the prevailing threats. Some protective measures include:

— (U//FOUO) Reducing the attraction of a facility to terrorists through installing adequate perimeter fencing or walls and barriers expanding the zone around the buildings and populated areas, as well as deploying a highly visible security force working closely with law enforcement and other first responders to prepare for any emergencies.

— (U//FOUO) Making the facility more difficult to attack by implementing random screening of people and their possessions, physical inspection of vehicles, and coverage of grounds by closed-circuit surveillance with 24-7 monitoring.

(U) The DHS/Office of Bombing Prevention provides analysis of counter-IED requirements and capabilities, and promotes IED information sharing, awareness and vigilance. Additional information on
explosives can be found at the DHS TRIPwire website, located athttps://www.tripwire-dhs.net. For access, contact the Office for Bombing Prevention at 703-235-5723 or OBP@dhs.gov.

(U) For comments or questions related to the content or dissemination of this document, please contact the DHS/I&A Production Branch staff at IA.PM@hq.dhs.gov, IA.PM@dhs.sgov.gov, or IA.PM@dhs.ic.gov.