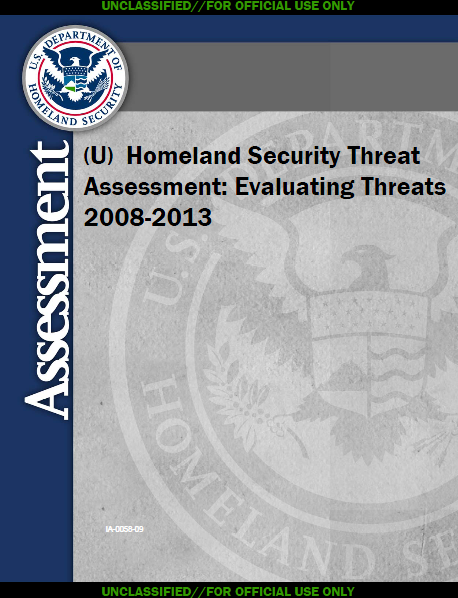 (U//FOUO) The 2008 Homeland Security Threat Assessment (HSTA) is a strategic assessment looking out five years. The HSTA represents the analytical judgments of the Department of Homeland Security (DHS) Intelligence Enterprise (IE) regarding the critical threats to the U.S. Homeland that the Department will need to address in the period 2008-2013. These threats are organized into six major categories:

(U//FOUO) The estimates in this assessment are designed to prevent surprise by explicitly highlighting threats that could result in an incident of national significance. Each of the categories of strategic threats is assessed in the following contextual framework:

— (U//FOUO) Enduring threats that DHS/IE believes will persist and continue to challenge the Homeland security community through 2013.
— (U//FOUO) High consequence, uncertain probability threats that could result from a dramatic departure from current trends, resulting in threats of greater significance.

— (U//FOUO) Computer network exploitation or computer network attacks could disrupt U.S.-networked critical infrastructure systems and “just-in-time” inventory and product distribution systems, crippling key sectors of the national economy.
— (U//FOUO) Criminal enterprises or terrorist groups could acquire the requisite cyber attack capabilities by outsourcing, corruption, or compromise and operate in an environment where it would be extremely difficult to detect the threat.

(U//FOUO) Extremism and Radicalization: Rightwing extremists’ responses to government policies perceived threatening to their goals could escalate from an enduring threat to a high consequence, uncertain probability threat such as a large-scale bombing or smaller scale, coordinated bombings. Small domestic cells and lone wolves could execute copycat attacks whose sinister nature could extend adverse social or psychological effects nationwide.

(U//FOUO) Cyber attacks hold the potential for the disruption of computer network systems throughout the United States, including Federal, State, local, and tribal governments and the private sector. Because of the distinct role DHS plays in protecting the Nation’s public and private cyber infrastructure, this year’s edition introduces a cyber-security section addressing related issues in greater depth.

(U//FOUO) Motivated by economic, political, military, and ideological rationales, a wider range of threat actors are increasing their capabilities to conduct cyber attacks against the United States. Islamic terrorists remain intent but generally lack the capability to conduct cyber attacks against the United States. Nation-states have the greatest capability to engage in cyber attacks. Criminal organizations are engaging in cyber activities for financial gain and target governments, private industries, and individuals. In addition, criminal organizations and independent hackers offer a wide array of hacking tools and services to those willing and able to purchase them, which could provide terrorists with the attack capabilities they currently lack.

(U) Nations as Cyber Threat Actors

(U//FOUO) Foreign nations are the most capable and resource-rich cyber threat actors. The most advanced nations have established active and robust information operations (IO) or CNO organizations. Some nations’ military and intelligence agencies have created distinct directorates to carry out aspects of IO, such as CNE, CND, and CNA. Several nations conduct cyber espionage against political, economic, and military targets in the United States.

— (U//FOUO) Only a handful of nations have all of these capabilities; the IO capabilities of other, less capable nations will continue to mature over the next five years.

(U//FOUO) An increasingly technologically savvy generation, inspired by both Islamic and non-Islamic extremist ideologies, is emerging and filling more prominent roles in extremist movements. These next-generation extremists, including young women, could complement and support extremist goals by applying their online acumen rather than offering themselves up as operatives for kinetic attacks. A segment of the next generation also may represent a movement away from group oriented radicalization in favor of individual action in support of extremist ideologies.

(U//FOUO) Online recruitment and propaganda are broadening outreach to Western recruits. The increasing potency and ubiquity of digital and online media outlets give terrorists and other extremists added leverage to exploit what they believe is a vulnerable pool of recruits.

(U//FOUO) The number of social networking sites likely will grow and be exploited by extremists to communicate and recruit. An increasing number of young individuals establish and maintain social connections through these sites, providing cover to extremists seeking to mask their communications and activities. According to open source reporting, some criminal gangs target and groom middle-school children for membership using social networking sites.

(U//FOUO) Domestic extremists organize around a full range of political, economic, religious, ethnic, or environmental issues and share a vehement conviction in the rightness of their views, which often are at odds with the population at large.

— (U//FOUO) On the extreme right, groups such as militia movements, neo-Nazis, and racist skinheads hold violent antigovernment and racist beliefs.
— (U//FOUO) Single issue extremists focus their energies on one cause. On the far left are groups that include animal-rights and environmental extremists; on the far right are groups that include antiabortion and anti-immigration extremists.
— (U//FOUO) Leftwing extremists, like violent revolutionary anarchists, are antigovernment but combine anticapitalist, antiglobalization, communist, and anarchist philosophies.