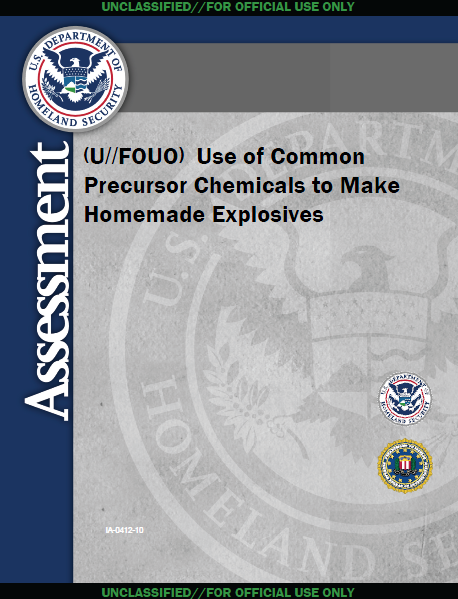 Use of Common Precursor Chemicals to Make Homemade Explosives

(U//FOUO) The DHS/Office of Intelligence and Analysis (I&A) and the FBI are releasing this Intelligence Assessment to raise awareness of terrorists’ ability to acquire chemical precursor materials to manufacture homemade explosives. The Assessment is intended to assist federal, state, and local government agencies and authorities, the private sector, and other entities to develop priorities for protective and support measures relating to an existing or emerging threat to homeland security.

(U//FOUO) Terrorists can acquire precursor materials legally through a variety of commercial transactions, secondhand from individuals with access to such substances, or through theft.

(U//FOUO) Many precursors can be purchased legitimately and without special authorization from chemical supply stores. They also are available at retail stores that sell beauty supply products, hardware and home improvement materials, groceries, and swimming pool supplies, and are used widely in hospitals, universities, construction sites, industrial facilities, farms, and mining operations.

— (U//FOUO) In September 2009, authorities arrested Najibullah ZaziUSPER, who later pleaded guilty to providing material support to al-Qa‘ida, among other charges. Zazi admitted he purchased from commercial sources materials necessary to produce the hydrogen peroxide-based explosive triacetone triperoxide (TATP) for use in improvised explosive devices (IEDs) in a planned attack on the New York subway.

— (U//FOUO) In April 2008, authorities arrested a high school senior, who later pleaded guilty to two federal explosives charges. His parents had called the police after ten pounds of ammonium nitrate (purchased over the Internet) was delivered to their home in Chesterfield, South Carolina. The teen had supplies sufficient for making several IEDs, and his journal contained precise plans on how to construct and deploy them, including documentation of several test detonations he had performed.

(U//FOUO) Would-be bombers can steal material, divert legitimate purchases, or falsify documents to procure these chemicals. Another method of acquisition is purchasing “precursors of precursors”—materials that require some processing to become suitable ingredients for the manufacture of HMEs. Precursors also can be accumulated by making multiple small purchases to minimize the attention a large purchase might generate.

— (U//FOUO) Islamic Jihad Union operatives arrested in Germany in July 2007 attempted to purchase highly concentrated hydrogen peroxide for bomb making, but were unable to do so without a permit. They later purchased it in lower concentrations that did not require a permit, with the intent of concentrating it themselves.

(U//FOUO) Almost every HME manufacturing process affects its immediate environment. Although a single indicator may not be suspicious in itself, one or more of these indicators may point to HME production: