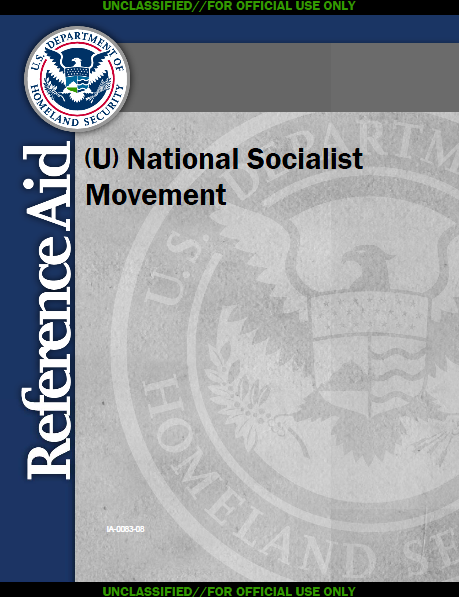 (U//FOUO) The National Socialist Movement (NSM) USPER is the most active neo-Nazi group operating in the United States. It has grown from a small organization with a limited following confined to the mid-western United States to the preeminent National Socialist group in the nation. Despite having recently suffered a defection of several regional leaders, NSM remains an influential force within white supremacist circles and the only major racist group that eschews all attempts to distance its methods and objectives from those of the Third Reich. NSM has a reputation for conducting numerous public rallies that have triggered a violent response, including a riot in Toledo, Ohio, in October 2005.

(U//FOUO) The National Socialist Movement (NSM) is the largest neo-Nazi organization in the United States. Founded in 1974 by two former members of the American Nazi PartyUSPER, NSM claims that it is the only  “legitimate” Nazi party operating in the United States. Although active since 1974, NSM only became a major player in the white supremacist movement in the late 1990s and has had its greatest period of growth over the past three years. This growth likely resulted from the collapse of other prominent neo-Nazi groups such as the National AllianceUSPER and Aryan NationsUSPER.

(U) Ideology and Objectives

(U//FOUO) NSM promotes the ideology of traditional National Socialism, which is a mix of racism, anti-Semitism, xenophobia, rabid anti-communism, and white supremacy. NSM seeks to transform the United States into a National Socialist state that would deny all rights to Jews, nonwhites, and gays. NSM also advocates the mass deportation of all illegal immigrants, the militarization of the Mexican border, the end of all foreign aid, and the severing of all ties with Israel.

(U//FOUO) NSM patterns its uniforms after those of the Third Reich’s Wehrmacht and the Waffen SS. The armbands, shoulder boards, and collar insignia used by NSM are replicas of those worn by the military units and political officers of Nazi Germany. NSM also uses many forms of Nazi symbols and imagery in its propaganda.

(U//FOUO) Although NSM has small chapters operating throughout the country, over half of its estimated active membership is based in the Midwest, primarily in Illinois, Michigan, Minnesota, Missouri, Ohio, and Wisconsin. Another large concentration of NSM members operates in the Southwestern United States, centered mainly in Arizona and Nevada. There are an estimated 300 active NSM members along with a similar number of associates that are active on NSM’s various Internet forums. Online members have little direct involvement with the group.

(U//FOUO) All active NSM members as well as new recruits are required to contribute monthly dues to help sustain the organization. NSM also generates a great deal of its revenue from sponsoring white power rock concerts and from the sale of racist music CDs, DVDs, video games, and other white power paraphernalia. NSM conducts much of their sales through its own music distributor, NSM88Records. The group uses funding to further their political ambitions, propaganda mechanisms, and various commercial enterprises that sell Nazi regalia and memorabilia.

(U) Targets of Actions

(U//FOUO) To date, NSM confines its activities primarily to conducting a series of high profile public rallies and marches targeting minority neighborhoods, illegal immigrants, and U.S. support to Israel. In several instances, these activities have triggered violent confrontations between protestors opposing NSM and law enforcement attempting to preserve public order. During an October 2005 march in Toledo, Ohio, police were unable to prevent local residents from rioting for several hours following the NSM rally. The disturbances resulted in the arrest of 120 rioters and the destruction of several local businesses. Toledo’s mayor was forced to restore order by imposing a curfew.

(U//FOUO) There is little or no evidence that NSM, as an organization, is engaged in any organized criminal activity. A large number of current and former members of NSM, however, have engaged in sporadic criminal acts that are unrelated to their involvement with the group. NSM members have committed a wide range of crimes to include: murder, kidnapping, rape, domestic violence, pedophilia, burglary, trespassing, and narcotics possession.