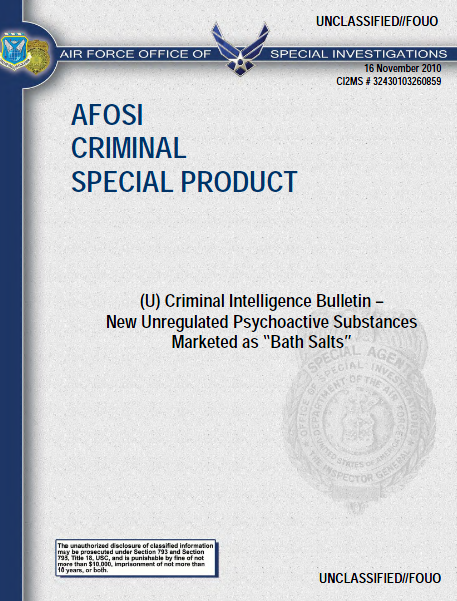 (U) This bulletin was produced to provide situational awareness to agents regarding new psychoactive substances that are being marketed as “bath salts.” These substances appear to have been designed to circumvent existing drug laws and are potentially harmful. Considering that these substances are still relatively new and have not been fully researched, it should be stressed that a significant amount of information presented in this bulletin derives from open sources.

(U) Unregulated psychoactive substances marketed as “bath salts” are among the latest in a series of legal synthetic drugs that are being offered as alternatives to illegal drugs. Produced as legal substitutes for ecstasy, cocaine and amphetamines, salts are powerful stimulant drugs designed to avoid legal prosecution and are commonly available on the internet and specialty head shops. They can be made up of a variety of unregulated chemical substances and are being sold under a variety of names or brands. Open sources indicate that “bath salts” are becoming increasingly popular due to the perception that they pose seemingly safer alternative to illegal methods of getting “high” and can easily be obtained over the Internet. Concerns regarding the safety of these drugs have prompted many European countries to take measures to stop the imports and selling of these products within their borders. Recent seizures nationwide suggest these powdered salts are making inroads in the US, thus becoming narcotics of potential concern.

(U) Chemical Make Up:

(U) Although not all brands of bath salts have been tested, those that have – such as Ivory Wave, Vanilla Sky and Whack – suggest that the principal active ingredient in these products is MDPV (Methylenedioxypyrovalerone), a highly potent synthetic cathinone derivative. Following the decision by a number of European governments to include MDPV on a list of controlled substances in mid 2010, it seems that the chemical composition of bath salts has changed. Limited testing in the United Kingdom suggests that post-April 2010 bath salts mainly consisted of 2-DPMP (2-diphenylmethylpiperidine) and DMAA (Dimethylamylamine). 2-DPMP, a substance closely linked to the drug methylphenidate (Ritalin) that exhibits similar pharmacological effects associated with amphetamines, was placed on an import ban in the UK in November 2010. DMAA, a synthetic cathinone derivative related to mephedrone, is often used in the medical field as a nasal decongestant and has been marketed commercially, in conjunction with other substances as a dietary supplement. Cutting agents such as the common local anaesthetic Lidocaine have also been found in addition to the active ingredients.

(U) Although “bath salt” products contain no specific directions for use, they are usually snorted but can also be smoked or swallowed.

(U) Desired Effect and User Symptoms:

(U) Considering that these “bath salt” products have not been fully researched, information of their effects and symptoms is limited. Although the precise effects tend to vary on dose and chosen administration route (oral or nasal) the drug has been reportedly used as a social lubricant, weight loss supplement, an aphrodisiac and as party fuel.