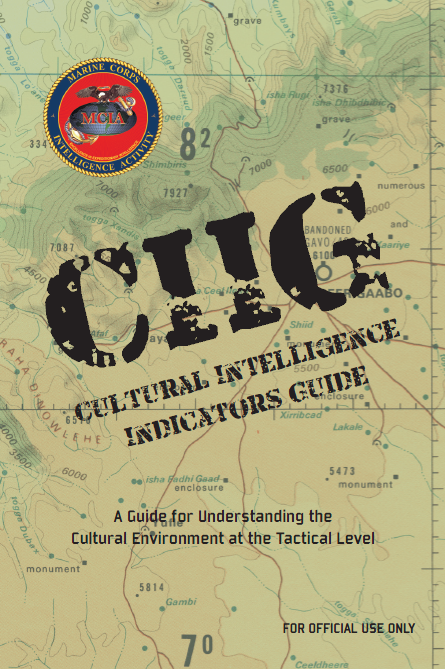 A Guide for Understanding the Cultural Environment at the Tactical Level

Understanding the local culture is critical to mission success. This Cultural Intelligence Indicators Guide (CIIG ) will contribute to an initial Intelligence Preparation of the Operational Environment that should be continuously updated by line companies. It is intended to aid Marines in the identification of key cultural observables during security and atmospherics patrols, while at the same time helping tactical unit leaders identify the information needed to understand and influence their local environment. The intent is to anticipate the second and third order effects of our actions in order to shape and influence events to our advantage.

How is this guide organized?

There are 12 sections within this guide. Within each section, the questions are divided into indicators Marines can observe during patrols and into things that Marines can find out during engagements with local populations. Marines may choose to focus of these sections directly tied to their mission. The first few sections cover basic cultural indicators about the local populace to include language, education, economy, health, and the environment. These indicators are most often readily observable or easily accessible and will help the Marines understand people’s backgrounds in order to anticipate or prevent potential sources of friction or conflict. The latter sections cover more complex cultural indicators such social organization, power and authority, values and beliefs, and motivating issues. These sections are crucial in helping Marines understand the organization and mindset of the local people in order to better shape and influence lines of operations.

Practical Field Application of the CIIG

During security and stability operations overseas, Marines set up check points where personnel were screened for identification. After a short time, the Marines turned the check points over to local police. They noticed, however, that some odd practices were cropping up. The local police were given instructions to not let anyone through after 1800 except uniformed members of the police and members of coalition forces. After a while, one of the Marines noticed that traffic did not diminish after 1800 for one check point in particular. The Marine joined a local policeman on guard duty and found that higher ranking police officers were running a taxi service for nonpolice locals who needed to pass the check point and were willing to pay. The local policeman at the checkpoint also got some money for every ‘taxi’ he let though. “But I have to let him through,” said the policeman when confronted. “He’s an important man in my tribe, so it’s hard for me to say no.”