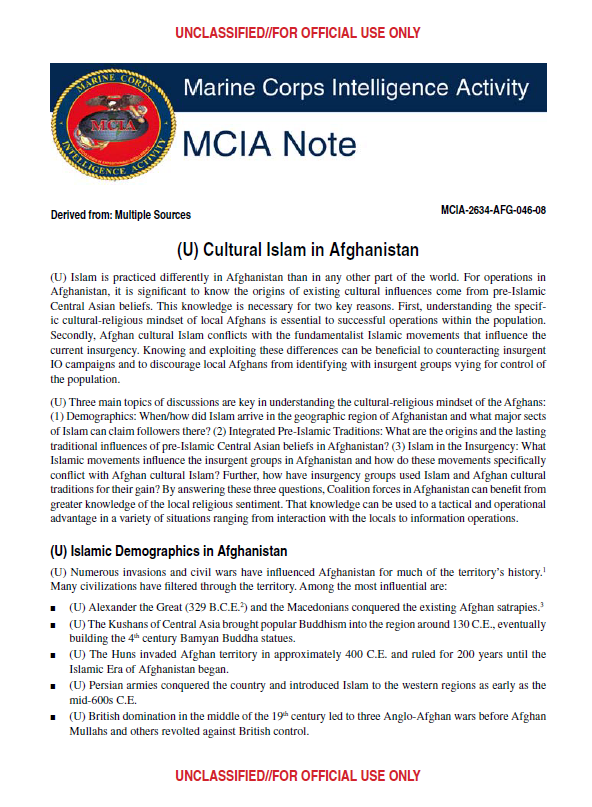 (U) Islam is practiced differently in Afghanistan than in any other part of the world. For operations in Afghanistan, it is significant to know the origins of existing cultural influences come from pre-Islamic Central Asian beliefs. This knowledge is necessary for two key reasons. First, understanding the specific cultural-religious mindset of local Afghans is essential to successful operations within the population. Secondly, Afghan cultural Islam conflicts with the fundamentalist Islamic movements that influence the current insurgency. Knowing and exploiting these differences can be beneficial to counteracting insurgent IO campaigns and to discourage local Afghans from identifying with insurgent groups vying for control of the population.

(U) Three main topics of discussions are key in understanding the cultural-religious mindset of the Afghans: (1) Demographics: When/how did Islam arrive in the geographic region of Afghanistan and what major sects of Islam can claim followers there? (2) Integrated Pre-Islamic Traditions: What are the origins and the lasting traditional influences of pre-Islamic Central Asian beliefs in Afghanistan? (3) Islam in the Insurgency: What Islamic movements influence the insurgent groups in Afghanistan and how do these movements specifically conflict with Afghan cultural Islam? Further, how have insurgency groups used Islam and Afghan cultural traditions for their gain? By answering these three questions, Coalition forces in Afghanistan can benefit from greater knowledge of the local religious sentiment. That knowledge can be used to a tactical and operational advantage in a variety of situations ranging from interaction with the locals to information operations.

(U//FOUO) Afghans are a traditionally superstitious culture who place heavy emphasis on signs, dreams, and symbols as logical decision factors in daily life. Further, several existing Afghan Islamic practices have their origin in pre-Islamic beliefs. These practices are based primarily in Central Asian belief systems that include lasting cult traditions, ziarats and shrine-worship, spirits (jinnd), witches, witchcraft, shamanism, and malangs. Most of these practices conflict with the strict interpretation of the Qur’an found in movements that influence the insurgency such as Wahhabism, Deobandism, and the teachings of Abdullah Azzam.

(U) Pre-Islamic belief systems in Afghanistan include ‘imported’ faiths like Zoroastrianism, Buddhism, and Hinduism. Lasting effects of these traditions are evident in the giant Buddhas of Bamyan Province and in the Kalash religion of the Nuristanis (forcibly converted to Islam in the mid-19th century). Legacies of the Hindu caste system are evident in popular Afghan folklore that is more than 2,400 years old. The Mogul ruler Akbar, who exerted considerable influence over Central Asia in the early 1500s, dreamed of uniting his empire under one religion, Din Illahi, which would combine elements of Islam, Christianity, Jain, Hindu, and Judaism. He was not aggressive in terms of forcefully converting the inhabitants of Central Asia, but his ideas influenced the Afghan traditions combining elements of many religious influences into their Islamic practice.

(U) In addition to the effects of these imported religions, there were also indigenous movements that remain key influences.

(U) Strategic Use of Islam in Afghanistan

(U) Insurgent propaganda is both effective and dangerous. The strategic use of religion, traditional cultural mediums like song and dance, and the timely distribution of propaganda to the media in local language gives the insurgency an advantage in IO efforts. To efficiently counter these efforts, which damage nationbuilding  incentive and Coalition success, it is significant to understand how and by what means the insurgents are strategically using Islam and other cultural traditions for their gain.

(U//FOUO) There are a number of instances where insurgent groups have used Islam as a method of gaining/coercing support from the local population. For example, Taliban propaganda suggested that Mullah Omar received dreams of Muhammad instructing him to unite Afghanistan under Shari’a. This helped the movement to gain legitimacy among the Afghan nationals. Not only does this example display a manipulative use of Afghan Islamic belief, but also of Afghan mystical traditions that place heavy emphasis on the importance of dreams.

(U) Karzai’s government has shown effective examples of recognizing the influence of religion among Afghans. The Religious Cultural Affairs division of the Afghan National Army is working to legitimize the new government and military through religious means. As one mullah, Moheburahman, points out: “The most effective thing that can persuade Muslims to do dangerous things and to fight is to give them the  legitimacy of what they are fighting for. I describe the legitimacy of this government and point to verses [in the Qur’an].”

(U) The insurgency also uses media outlets to manipulate the Afghan public’s religious and cultural traditions. There are recent reports of Taliban use of DVDs, song, and poems (most of which were once banned under Taliban rule) to spread propaganda. Media outlets like newspapers and television reports also show evidence of this propaganda effort.

(U) On 26 March 2001, a Kandahar paper, Tolu-e Afghan, an article written in Pashtu, reported that the true aim of the United States in Afghanistan was to eliminate Islam. This insurgent propaganda cited the Secretary of Defense’s anger at the Taliban’s destruction of a historic statue of Buddha as evidence that the United States wanted to eliminate Islam from Afghanistan. The article continues to accuse the United States government of encouraging “nakedness” and “degradation” of Afghan women. The article also identifies Coalition-supporting Afghans as “pro-infidel” Afghans and claims they are part of the problem. This kind of reporting is an effective method of intimidating Afghan locals and using their fear of God to not only turn locals against United States forces, but also to help eliminate local customs and traditions that separate Afghan Muslim practices from the Taliban’s ideals.