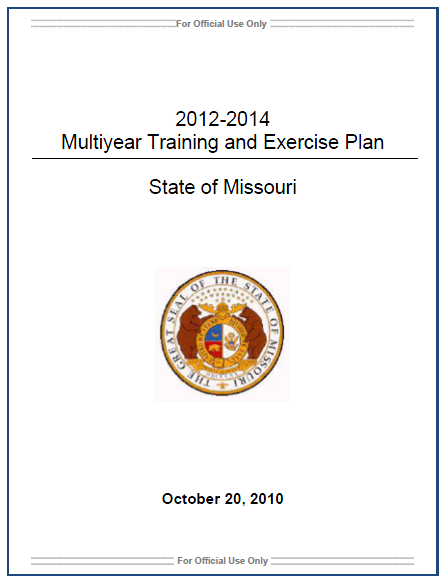 The 2010 Missouri Training and Exercise Planning Workshop (TEPW) was hosted by the Missouri Office of Homeland Security on October 20, 2010 at the Truman Hotel in Jefferson City, Missouri. The TEPW was funded by the Department of Homeland Security (DHS) through the Regional Exercise Support Program and delivered by facilitators from Battelle Memorial Institute, working under the direction of Northrop Grumman Corporation.

This TEPW provided participants the opportunity to exchange information about upcoming state-level training and exercises. Primarily, however, the workshop was a venue for state representatives to review, validate, and prioritize the state’s target capabilities that would be the focus of the state’s exercises and training in 2011-14. There were thirty-three participants in attendance at the TEPW, representing thirteen State agencies, three regions within the state, one local agency, the Mid-American Regional Council (MARC), the St. Louis Area Regional Response System (STARRS), the Missouri Emergency Response Commission (MERC), the Missouri National Guard (MONG), and FEMA Region VII. The group developed for publication the Missouri Multi-Year Training and Exercise Plan (MYTEP) for 2012-2014.