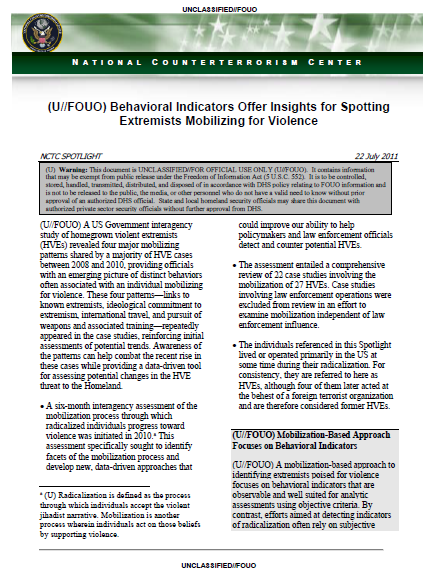 (U//FOUO) A US Government interagency study of homegrown violent extremists (HVEs) revealed four major mobilizing patterns shared by a majority of HVE cases between 2008 and 2010, providing officials with an emerging picture of distinct behaviors often associated with an individual mobilizing for violence. These four patterns—links to known extremists, ideological commitment to extremism, international travel, and pursuit of weapons and associated training—repeatedly appeared in the case studies, reinforcing initial assessments of potential trends. Awareness of the patterns can help combat the recent rise in these cases while providing a data-driven tool for assessing potential changes in the HVE threat to the Homeland.

(U//FOUO) A mobilization-based approach to identifying extremists poised for violence focuses on behavioral indicators that are observable and well suited for analytic assessments using objective criteria. By
contrast, efforts aimed at detecting indicators of radicalization often rely on subjective assessments of factors—such as an individual’s mental state, degree of ideological convictions, and personal motivations—that do not readily lend themselves to data-based analysis.

(U//FOUO) Four prominent, observable behavioral patterns of HVEs who have mobilized for violence emerged in our review of the case studies.

(U//FOUO) Contact with individuals tied to terrorist organizations is one of two indicators that appeared most often in our case studies. This finding is consistent with earlier assessments—based on past cases of domestic and transnational terrorism—that exposure to an extremist with established ties to a terrorist group can be a useful indicator of a radicalized person moving toward violence.

(U//FOUO) Indicators of ideological commitment also appear frequently in HVE reporting. One of these behaviors—“watching or sharing jihadist videos”—was the second of the two most prevalent indicators noted in the study. Ideological commitment behaviors were observable but at times only in a virtual environment.

(U//FOUO) Travel or attempted travel in pursuit of violent jihad was a recurring factor in the HVE cases, also supporting earlier assessments of the importance of foreign travel for violent extremists.

Search for Weapons or Weapons-Related Training

(U//FOUO) Checklist Approach to Mobilization Indicators Most Likely To Backfire

(U//FOUO) The wide array of indicators reflected in the case studies, coupled with the variety of US organizations that appear best placed to detect specific signs, cautions against adopting a checklist-like mentality in countering the HVE threat. Simplistically interpreting any single indicator as a confirmation of mobilization probably will lead to ineffective and counterproductive efforts to identify and defeat HVEs.

(U//FOUO) Finding combinations of indicators offers the best approach to countering HVEs. Identifying such combinations in a timely manner requires collaboration that taps the capabilities of federal, state, and local government agencies and their nongovernment partners. 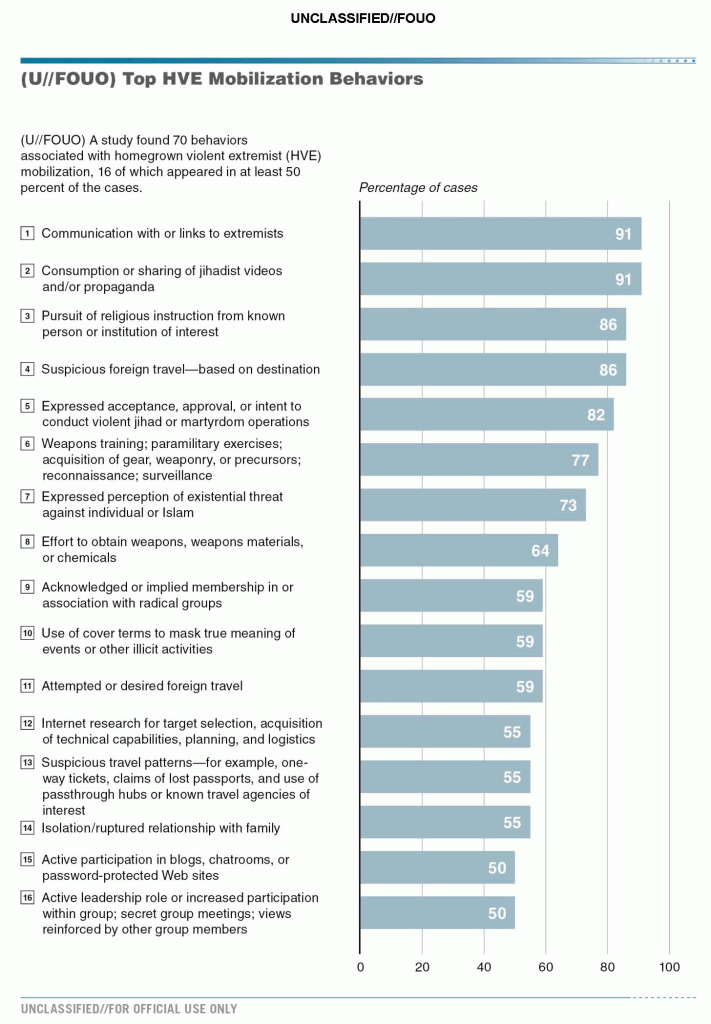