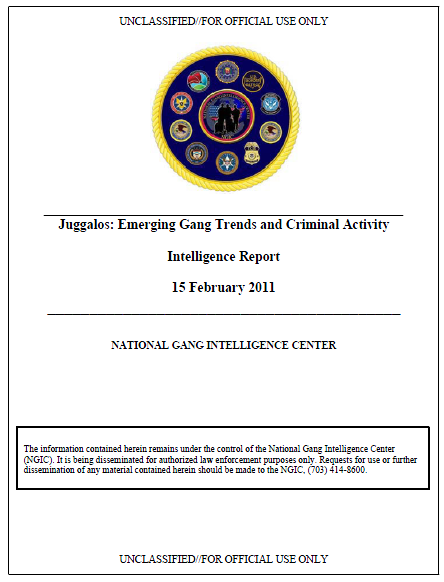 (U//FOUO) Increasing criminal activity among Juggalos is of concern due to the ease with which these transitory and loosely affiliated criminal sub-sets are able to form and break off of the well established Juggalo sub-culture of over one million followers. Their crimes are characterized by acts of violence and destruction directed against law enforcement, members of the community, public/private property, and other members of their group. Juggalos are classified as a gang in the states of Arizona, California, Pennsylvania and Utah. Despite this narrow classification, Juggalo-related crime has been documented in at least 20 other states according to law enforcement and open-source reporting.

(U) Juggalo criminal groups generally engage in assault, robbery, theft, drug possession/sales, vandalism, and to a lesser extent murder. On average, these criminal groups consist of Caucasian males ages 16 to 26. There is little to no structure within the group, and there is no formalized leadership. Due to this lack of structure and absence of leadership, most crimes are not committed on behalf of the group; rather they are more sporadic and individualistic in nature.

(U) The Juggalo criminal element has been well documented in the states of Arizona, California, Pennsylvania, and Utah. However, law enforcement reporting suggests that criminal activity in Juggalo groups has grown over the past six years and has spread to several other states in which Juggalo-related crime is becoming a mounting concern in the community and among law enforcement.

(U) Juggalo sub-sets are beginning to evolve and take on more of a gang-like resemblance. Establishment and organization within these sub-sets is discernable and set apart from the loosely affiliated Juggalo groups. This evolution may be attributed to a sub-sets affiliation with an already established local/national street gang or gang members that have infiltrated the Juggalo criminal group.

(U//LES) Juggalos exist nationwide and exhibit many of the same characteristics as a traditional gang such as throwing hand signs, wearing matching tattoos, and dressing in similar clothing. Over the years, two sides to the Juggalo sub-culture have emerged. According to an admitted Juggalo gang member, there are two active but very different factions of the Juggalos: the music fans and the criminal street gang.

(U//LES) The nationwide Juggalo membership, believed to be over one million fans/followers, vehemently reject the gang label they have received in recent years. The majority of the Juggalo sub-culture following, which constitutes the non-criminal element, likens themselves to a “family”.

(U//LES) The sub-set groups constituting the criminal element have broken off of the mainstream Juggalo subculture. These individuals have been identified as a younger generation taking the sub-culture to a different level, evolving the group into gangs or cliques. Most criminally-active Juggalos claim that their identity as a member of the Juggalo community is a lifestyle society has placed upon them.

(U//LES) Juggalo criminal activity presents a threat to law enforcement, schools, and the community. Juggalo criminal groups operate in multiple states, not just the ones that classify them as a gang. According to law enforcement reporting, police departments in at least 13 states have identified established, criminal Juggalo sub-sets. These states include: Arizona, California, Colorado, Florida, Kansas, North Carolina, Oklahoma, Oregon, Pennsylvania, Tennessee, Texas, Utah, and Washington. Although many of these states do not officially recognize the Juggalos as a gang, police departments in all of these states have documented criminal activity with the respective Juggalo groups operating in their area.