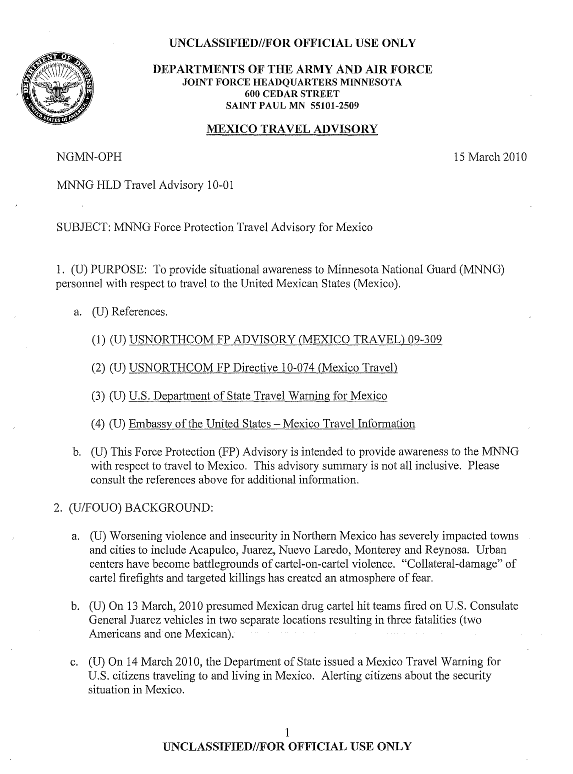 1. (U) PURPOSE: To provide situational awareness to Minnesota National Guard (MNNG) personnel with respect to travel to the United Mexican States (Mexico).

(3) (U) U.S. Department of State Travel Warning for Mexico

(4) (U) Embassy of the United States – Mexico Travel Information

b. (U) This Force Protection (FP) Advisory is intended to provide awareness to the MNNG with respect to travel to Mexico. This advisory summary is not all nclusive. Please consult the references above for additional information.

a. (U) Worsening violence and insecurity in Northern Mexico has severely impacted towns
and cities to include Acapulco, Juarez, Nuevo Laredo, Monterey and Reynosa. Urban
centers have become battlegrounds of cartel-on-cartel violence. “Collateral-damage” of
cartel firefights and targeted killings has created an atmosphere of fear.

c. (U) On 14 March 2010, the Department of State issued a Mexico Travel Warning for
U.S. citizens traveling to and living in Mexico. Alerting citizens about the security
situation in Mexico.

d. (U) U.S. citizens traveling throughout Mexico should exercise caution in unfamiliar areas
and be aware of their surroundings at all times. Bystanders have been injured or killed in
violent attacks in cities across the country, demonstrating the heightened risk of violence
in public places. Dozens of U.S. citizens living in Mexico have been kidnapped and most
of their cases remain unsolved. U.S. citizens who believe they are being targeted for
kidnapping or other crimes should notify Mexican law enforcement officials and the U.S.
Embassy in Mexico City or the nearest U.S. Consulate as soon as possible, and should
consider returning to the U.S. immediately. U.S. citizen visitors are encouraged to stay in
the well-known tourist areas.

(1) (U) The FPCON baseline for Mexico remains unchanged at BRAVO. The DIA
criminal threat is HIGH. USNORTHCOM is not considering a FPCON change at
this time.

(2) (U) There has been no confirmation of direct targeting of DoD personnel; however,
drug trafficking organizations may view U.S. support to Mexico’s counter-narcotics
efforts as a threat, potentially targeting DoD persOlmel.

(3) (U) Information concerning travel to Mexico can be found at Travel Warning 14
March, 2010 and Mexico Country Specific Information.