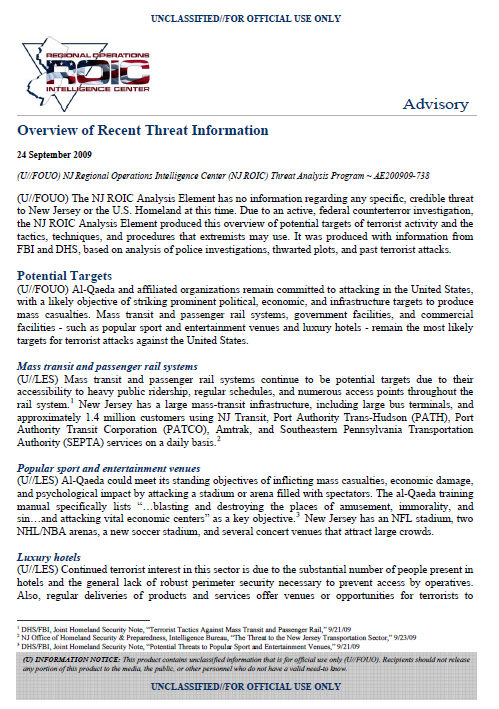 (U//FOUO) The NJ ROIC Analysis Element has no information regarding any specific, credible threat to New Jersey or the U.S. Homeland at this time. Due to an active, federal counterterror investigation, the NJ ROIC Analysis Element produced this overview of potential targets of terrorist activity and the tactics, techniques, and procedures that extremists may use. It was produced with information from FBI and DHS, based on analysis of police investigations, thwarted plots, and past terrorist attacks.

(U//FOUO) Al-Qaeda and affiliated organizations remain committed to attacking in the United States, with a likely objective of striking prominent political, economic, and infrastructure targets to produce mass casualties. Mass transit and passenger rail systems, government facilities, and commercial facilities – such as popular sport and entertainment venues and luxury hotels – remain the most likely targets for terrorist attacks against the United States.

(U//FOUO) The information provided by FBI and DHS also highlighted potential terrorist tactics, techniques, and procedures that may be of concern to New Jersey law enforcement and homeland security officials. These areas include:

(U//LES) Violent extremists have used explosives made from ingredients readily available at retail stores in the United States or over the Internet. Triacetone triperoxide (TATP) and hexamethylene triperoxide diamine (HMTD) are two common homemade explosives built with ydrogen peroxide.

(U//LES) TATP and HMTD are extremely sensitive to impact, friction, static/sparks, and heat, and may react violently to field drug testing. Similarities in appearance and production methods may cause first responders to mistake them for clandestinely manufactured narcotics (i.e., methamphetamine), creating a potential, additional hazard.

(U//LES) High-profile, historic examples include the London attacks in July 2005, in which suicide bombers used homemade hydrogen-peroxide based explosives to carry out attacks,9 and the December 2001 attempted attack by “shoe-bomber” Richard Reid, who attempted to detonate a TATP explosive device while flying from Paris to Miami.

(U//LES) Suspicious activity is not always actionable, but when placed in context with additional behaviors or with other information, may indicate a potential threat.12 The following are some examples of potential suspicious activity: