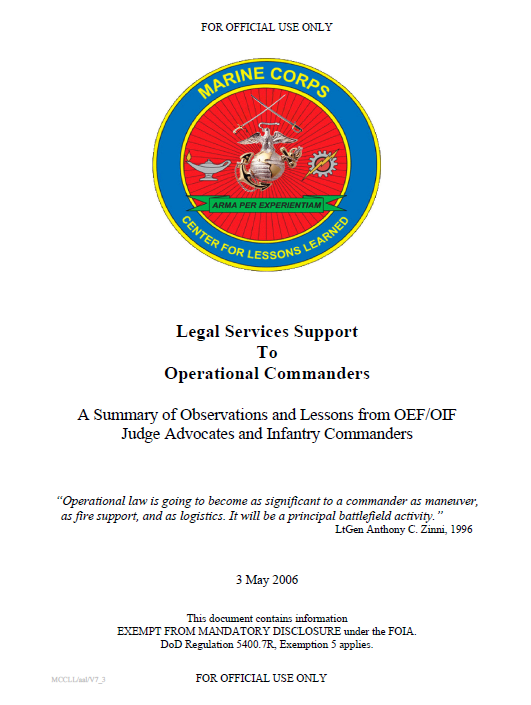 • Marine Corps Legal Services Support doctrine, which was last updated during the Cold War in 1984, does not match the needs of Marine warfighters and the reality of wartime legal practice today. The Marine Corps is the only armed service that does not have a stand-alone doctrinal publication devoted to legal services. Marine Corps Legal Services Support doctrine requires immediate revision to better establish the training, sourcing and organization of Marine Judge Advocates for deployment in support of the current “Long War” environment of world-wide conflict.

• The tactical considerations of OEF/OIF counter-insurgency operations require that legal
services be provided as far forward as possible. Widely dispersed battalion commanders
indicate that as long as they are operating in a counter-insurgency environment, timely
legal service support is an essential element of mission accomplishment. A deployed
battalion commander’s time-sensitive legal needs must be supported quickly or they
might as well not be supported at all. The innovative practice of assigning a Judge
Advocate to each infantry battalion in OIF has been a proven force multiplier that should
continue in the future.

• The excellent efforts by Marine Corps schools such as The Basic School (TBS) and the
Expeditionary Warfare School (EWS) to provide Law of War and operational law followon
training to all Marine Officers should continue.

• A Marine Corps Order specifically mandates that all commanders will receive specialized
Law of War training, but only 25 percent of the commanders surveyed had received it. A
greater effort needs to be made to see that commanders get all such training that is
available to them. The better a commander understands the role of operational law on the
battlefields of today, the more effective that commander will be as a warfighter.﻿