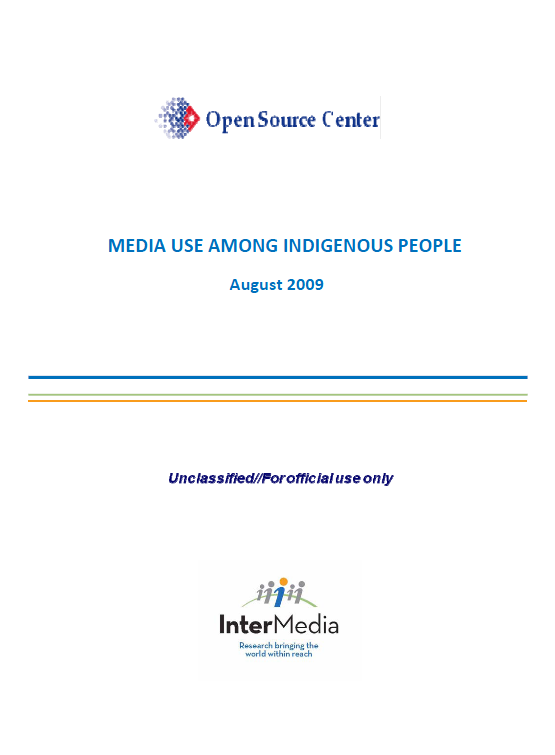 MEDIA USE AMONG INDIGENOUS PEOPLE

At the request of Open Source Center, InterMedia commissioned the La Paz-based research firm Apoyo Bolivia to conduct a qualitative research study in Bolivia to analyze the use of media among indigenous groups, including their media consumption, habits and opinions. The study involved 10 depth interviews that took place in August 2009 in four departments: Cochabamba, Chuquisaca, La Paz and Oruro. This qualitative study represents the views of these participants only and does not necessarily represent the view of all Bolivians.

This report presents the results of 10 depth interviews conducted with indigenous people in
the Andean region regarding their media consumption, habits and opinions. Bolivia has the
largest indigenous communities and population in South America. According to the National
Institute of Statistic in Bolivia (INE), 4,133,138 of Bolivians are indigenous; they represent
half the population of Bolivia. Approximately 55 percent of indigenous Bolivians live in
rural areas. According to INE, there are five indigenous communities in Bolivia: Quechuas,
Aymaras, Chiquitanos, Mojeños and Guaranís.

The 10 interviewees’ hometowns cover four of Bolivia’s departments: Cochabamba,
Chuquisaca, La Paz and Oruro. They range from small towns to the capital city of Sucre.
Their media access and habits vary widely depending on their location. Those living in small
towns, such as Calamarca (La Paz) and Machacamarca (Oruro), have very limited media
access—only a few radio and TV stations, and little or no local access to newspapers and
internet. Respondents in Sucre and Punata (Cochabamba) have easy access to multiple media
sources, including local internet cafés and a variety of national and local TV and radio
stations.

The media most readily accessible to respondents in all locations are TV, radio and cell
phones. All respondents have their own cell phone and have a TV and radio set at home. For
most respondents, however, newspaper access is limited to once or twice a week depending
on traveling vendors. No respondents have a computer at home; they use the internet at an
internet café or other public place.

Most respondents follow the news daily or several times a day. They rely on national TV
stations as their primary source of news, although they consult a variety of available sources.
They generally consider national TV newscasts the most credible and comprehensive source
of Bolivian news. For community news, however, they primarily rely on community radio
stations and/or community meetings. Most respondents do not rely on information from the
internet. Although all respondents have cell phones, they do not use their phones for
accessing information (whether via internet or news services) because of the high cost and,
in some cases, lack of interest. Due to limited access, newspapers and internet are generally
secondary sources.

Respondents vary in their satisfaction with the media available to them and quality of
information they receive. Most respondents feel the national news (on TV or radio) keeps
them well informed; those who read newspapers are satisfied with the depth and breadth of
information provided. However, those respondents with limited media access express
frustration about the lack of information and sources available to them. Some respondents
without access to multiple media sources do not completely trust the information offered by
any individual media outlet. These respondents believe the Bolivian media are not objective
and they can only find the truth by consulting various sources.

Respondents said people do not use traditional media, such as posters, flyers and
megaphones, for spreading news. Community radio is mentioned as the most-used medium
to spread news. Furthermore, respondents affirm that word-of-mouth plays an important
role in their communities. Due to their lack of confidence in their primary news sources,
many respondents like to verify news they have learned from TV or radio by checking
another source. A few do this by going on the internet; others ask a trusted relative, friend or
colleague if they have heard the same news elsewhere.

Despite the global explosion of internet and cell phone use over the past several years and
the increased presence of both mediums in their lives, interviewees did not report any major
changes in either their own media habits or in that of their communities. Although some said
the internet is becoming more important in their field of work or study, it has not yet affected
the daily lives of most respondents. Respondents suggest the internet will not make a major
impact where they live until computers and the internet become easily and inexpensively
accessible either at home or in their communities.