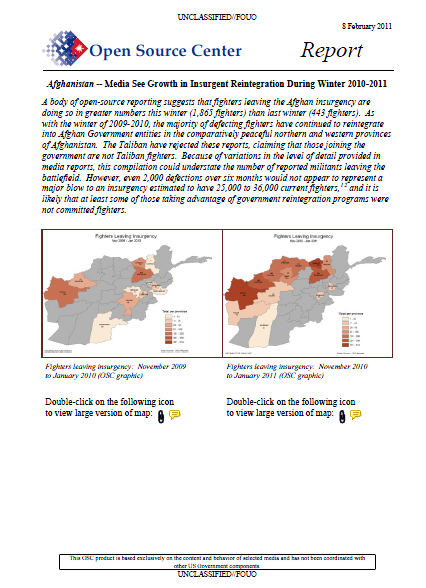 A body of open-source reporting suggests that fighters leaving the Afghan insurgency are doing so in greater numbers this winter (1,865 fighters) than last winter (443 fighters). As with the winter of 2009-2010, the majority of defecting fighters have continued to reintegrate into Afghan Government entities in the comparatively peaceful northern and western provinces of Afghanistan. The Taliban have rejected these reports, claiming that those joining the government are not Taliban fighters. Because of variations in the level of detail provided in media reports, this compilation could understate the number of reported militants leaving the battlefield. However, even 2,000 defections over six months would not appear to represent a major blow to an insurgency estimated to have 25,000 to 36,000 current fighters, and it is likely that at least some of those taking advantage of government reintegration programs were not committed fighters.

Greater Number of Defections This Winter

Insurgents appear to be surrendering in far greater numbers this winter (1 November 2010 to 31 January 2011) than in the previous winter (1 November 2009 to 31 January 2010). Approximately 1,865 fighters have reportedly surrendered to the Afghan Government, compared to approximately 443 fighters in the last winter, an increase of almost 400 percent.

Insurgents have overwhelmingly surrendered in the relatively peaceful areas encompassing the International Security Assistance Force’s (ISAF) North and West regional commands rather than in the much more violent South and East, although it is unclear why. As suggested in a previous OSC Analysis,

• The vast majority of insurgents were reintegrated into seven provinces this winter: Baghlan (241), Balkh (141), Faryab (140), Jowzjan (153), and Kunduz (330) in Regional Command (RC) North; and Badghis (240) and Herat (400) in RC West. the greater numbers of Taliban fighters and greater concentration of Pashtuns — the ethnic group to which most Taliban belong — in the South and East may increase Taliban cohesion, making it more difficult for disaffected insurgents there to switch sides. It is also possible that insurgents leaving the battlefield prefer to resettle with their families in the safer North and West and that some provinces in these areas offer better benefits to defectors.

Taliban spokesman Zabiullah Mujahid “rejected” reports of insurgents joining the government, claiming that “these people are not mujahidin” and are not affiliated with the Taliban.