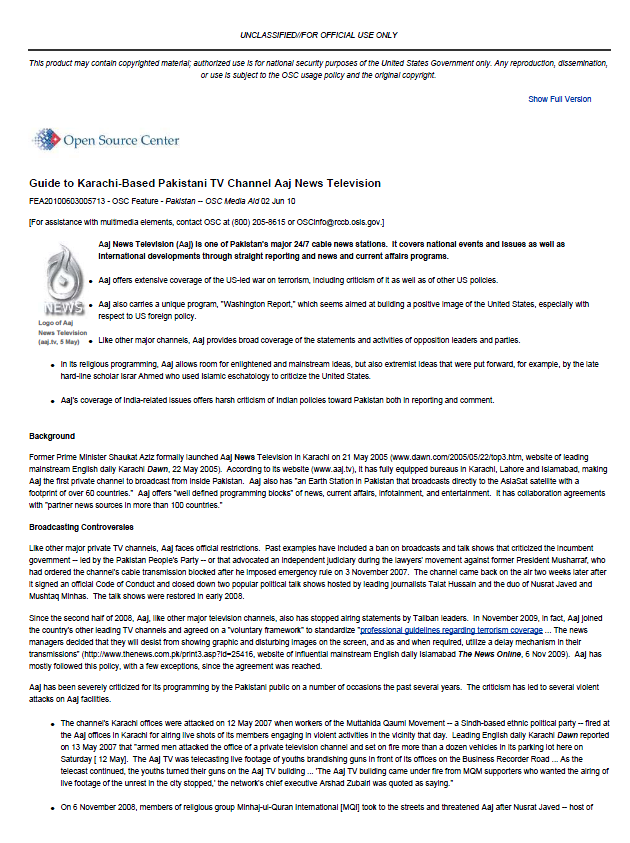 Aaj News Television (Aaj) is one of Pakistan’s major 24/7 cable news stations. It covers national events and issues as well as international developments through straight reporting and news and current affairs programs.

Like other major private TV channels, Aaj faces official restrictions. Past examples have included a ban on broadcasts and talk shows that criticized the incumbent government — led by the Pakistan People’s Party — or that advocated an independent judiciary during the lawyers’ movement against former President Musharraf, who had ordered the channel’s cable transmission blocked after he imposed emergency rule on 3 November 2007. The channel came back on the air two weeks later after it signed an official Code of Conduct and closed down two popular political talk shows hosted by leading journalists Talat Hussain and the duo of Nusrat Javed and Mushtaq Minhas. The talk shows were restored in early 2008.

Since the second half of 2008, Aaj, like other major television channels, also has stopped airing statements by Taliban leaders. In November 2009, in fact, Aaj joined the country’s other leading TV channels and agreed on a “voluntary framework” to standardize “professional guidelines regarding terrorism coverage … The news managers decided that they will desist from showing graphic and disturbing images on the screen, and as and when required, utilize a delay mechanism in their transmissions” (http://www.thenews.com.pk/print3.asp?id=25416, website of influential mainstream English daily Islamabad The News Online, 6 Nov 2009). Aaj has mostly followed this policy, with a few exceptions, since the agreement was reached. Aaj has been severely criticized for its programming by the Pakistani public on a number of occasions the past several years. The criticism has led to several violent attacks on Aaj facilities.