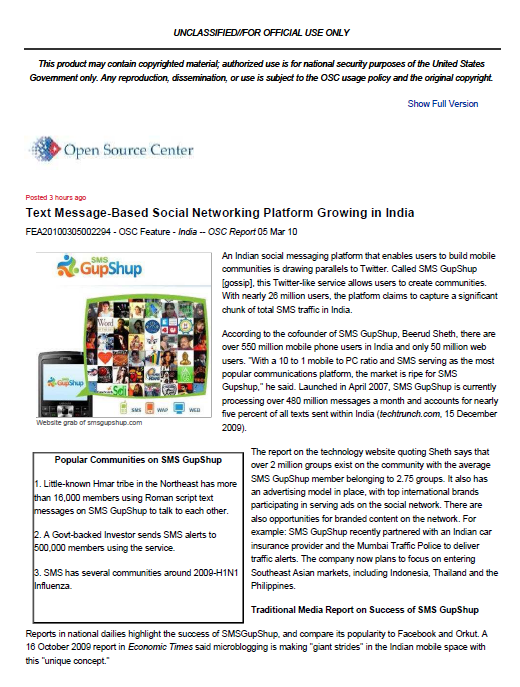 According to the cofounder of SMS GupShup, Beerud Sheth, there are over 550 million mobile phone users in India and only 50 million web users. “With a 10 to 1 mobile to PC ratio and SMS serving as the most popular communications platform, the market is ripe for SMS Gupshup,” he said. Launched in April 2007, SMS GupShup is currently processing over 480 million messages a month and accounts for nearly five percent of all texts sent within India (techtrunch.com, 15 December 2009).

The report on the technology website quoting Sheth says that over 2 million groups exist on the community with the average SMS GupShup member belonging to 2.75 groups. It also has an advertising model in place, with top international brands participating in serving ads on the social network. There are also opportunities for branded content on the network. For example: SMS GupShup recently partnered with an Indian car insurance provider and the Mumbai Traffic Police to deliver traffic alerts. The company now plans to focus on entering Southeast Asian markets, including Indonesia, Thailand and the Philippines.

Reports in national dailies highlight the success of SMSGupShup, and compare its popularity to Facebook and Orkut. A 16 October 2009 report in Economic Times said microblogging is making “giant strides” in the Indian mobile space with this “unique concept.”

SMS GupShup reportedly raised 12 million dollars in funding, which the company plans to use for expansion and rolling out new features like the Mobile CRM solutions for small businesses and corporate brands. Sheth says “we expect to use the proceeds from this funding round to accelerate our growth and expand our operations globally, to make our products useful to each of the four billion mobile subscribers worldwide” (indiantelevision.com, 20 January) The revenue is generated from advertisements attached to messages, revenue sharing with mobile carriers who offer the number code service, and services like forming communities for corporate clients (Hindustan Times, 30 August 2009). While it does not charge a fee for passing on the message, it reserves the right to insert an advertisement at the bottom of the message. Brands pay GupShup to create interactive mobile communities (Business Line, 10 September 2009).