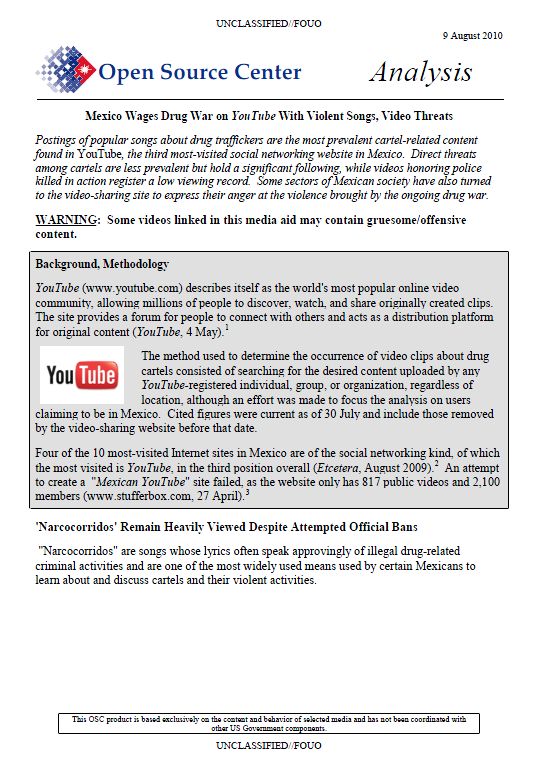 WARNING: Some videos linked in this media aid may contain gruesome/offensive content.

YouTube (www.youtube.com) describes itself as the world’s most popular online video community, allowing millions of people to discover, watch, and share originally created clips. The site provides a forum for people to connect with others and acts as a distribution platform for original content (YouTube, 4 May).

The method used to determine the occurrence of video clips about drug cartels consisted of searching for the desired content uploaded by any YouTube-registered individual, group, or organization, regardless of location, although an effort was made to focus the analysis on users claiming to be in Mexico. Cited figures were current as of 30 July and include those removed by the video-sharing website before that date.

Four of the 10 most-visited Internet sites in Mexico are of the social networking kind, of which the most visited is YouTube, in the third position overall (Etcetera, August 2009). An attempt to create a “Mexican YouTube” site failed, as the website only has 817 public videos and 2,100 members (www.stufferbox.com, 27 April).

“Narcocorridos” are songs whose lyrics often speak approvingly of illegal drug-related criminal activities and are one of the most widely used means used by certain Mexicans to learn about and discuss cartels and their violent activities.

“Narcocorridos ” and related video postings register the highest numbers of hits of any cartel-related YouTube communications.