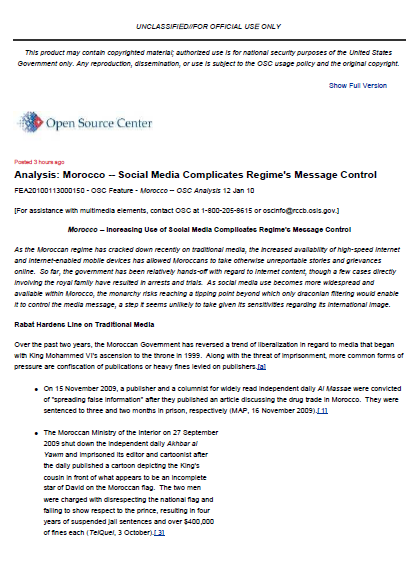 As the Moroccan regime has cracked down recently on traditional media, the increased availability of high-speed Internet and Internet-enabled mobile devices has allowed Moroccans to take otherwise unreportable stories and grievances online. So far, the government has been relatively hands-off with regard to Internet content, though a few cases directly involving the royal family have resulted in arrests and trials. As social media use becomes more widespread and available within Morocco, the monarchy risks reaching a tipping point beyond which only draconian filtering would enable it to control the media message, a step it seems unlikely to take given its sensitivities regarding its international image.

Over the past two years, the Moroccan Government has reversed a trend of liberalization in regard to media that began with King Mohammed VI’s ascension to the throne in 1999. Along with the threat of imprisonment, more common forms of pressure are confiscation of publications or heavy fines levied on publishers.

As increasing portions of Moroccan society begin to gather news on the Internet, the regime will be faced with a decision regarding the extent and purpose of its control over the Internet. Rabat will likely choose to keep the status quo, rather than cracking down on Internet use, in effect liberalizing the online community over time as more citizens gain Internet access and limited government resources mean only the most egregious offenders can be prosecuted.