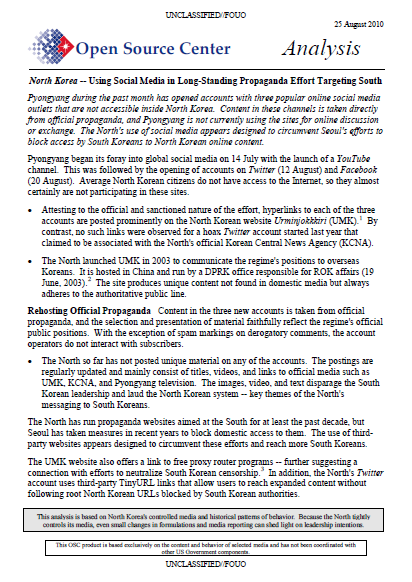 This analysis is based on North Korea’s controlled media and historical patterns of behavior. Because the North tightly controls its media, even small changes in formulations and media reporting can shed light on leadership intentions.

Pyongyang during the past month has opened accounts with three popular online social media outlets that are not accessible inside North Korea. Content in these channels is taken directly from official propaganda, and Pyongyang is not currently using the sites for online discussion or exchange. The North’s use of social media appears designed to circumvent Seoul’s efforts to block access by South Koreans to North Korean online content.

Pyongyang began its foray into global social media on 14 July with the launch of a YouTube channel. This was followed by the opening of accounts on Twitter (12 August) and Facebook (20 August). Average North Korean citizens do not have access to the Internet, so they almost certainly are not participating in these sites.

• Attesting to the official and sanctioned nature of the effort, hyperlinks to each of the three accounts are posted prominently on the North Korean website Urminjokkkiri (UMK).

• The North launched UMK in 2003 to communicate the regime’s positions to overseas Koreans. It is hosted in China and run by a DPRK office responsible for ROK affairs (19 June, 2003). By contrast, no such links were observed for a hoax Twitter account started last year that claimed to be associated with the North’s official Korean Central News Agency (KCNA).

Rehosting Official Propaganda Content in the three new accounts is taken from official propaganda, and the selection and presentation of material faithfully reflect the regime’s official public positions. With the exception of spam markings on derogatory comments, the account operators do not interact with subscribers. The site produces unique content not found in domestic media but always adheres to the authoritative public line.

• The North so far has not posted unique material on any of the accounts. The postings are regularly updated and mainly consist of titles, videos, and links to official media such as UMK, KCNA, and Pyongyang television. The images, video, and text disparage the South Korean leadership and laud the North Korean system — key themes of the North’s messaging to South Koreans.

The North has run propaganda websites aimed at the South for at least the past decade, but Seoul has taken measures in recent years to block domestic access to them. The use of third-party websites appears designed to circumvent these efforts and reach more South Koreans.﻿