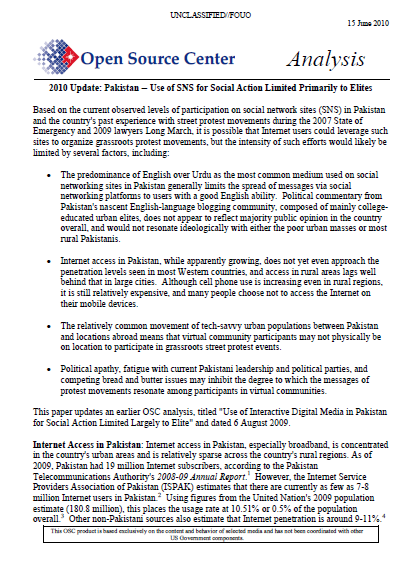 2010 Update: Pakistan — Use of SNS for Social Action Limited Primarily to Elites

Based on the current observed levels of participation on social network sites (SNS) in Pakistan and the country’s past experience with street protest movements during the 2007 State of Emergency and 2009 lawyers Long March, it is possible that Internet users could leverage such sites to organize grassroots protest movements, but the intensity of such efforts would likely be limited by several factors, including:

This paper updates an earlier OSC analysis, titled “Use of Interactive Digital Media in Pakistan for Social Action Limited Largely to Elite” and dated 6 August 2009.

Internet Access in Pakistan: Internet access in Pakistan, especially broadband, is concentrated in the country’s urban areas and is relatively sparse across the country’s rural regions. As of 2009, Pakistan had 19 million Internet subscribers, according to the Pakistan Telecommunications Authority’s 2008-09 Annual Report. However, the Internet Service Providers Association of Pakistan (ISPAK) estimates that there are currently as few as 7-8 million Internet users in Pakistan. Using figures from the United Nation’s 2009 population estimate (180.8 million), this places the usage rate at 10.51% or 0.5% of the population overall. Other non-Pakistani sources also estimate that Internet penetration is around 9-11%.

Blogs Likely To Remain Peripheral to Mainstream Media in Near Future:

Although a few Pakistani bloggers are also regular columnists in Pakistan’s English-language papers, there is limited discussion of blogs in mainstream Pakistani media, and English-language blogs do not appear to have much, if any, political influence in Pakistan. They do, however, offer the opportunity for like-minded Internet users in Pakistan and abroad to connect with each other and discuss current political topics.

Gatherings organized and advertised on free online social networking platforms such as Facebook and Twitter are providing a foundation of Internet communication channels that could help virtual communities in Pakistan organize quickly around a future issue or cause, similar to the student rallies held at universities during the State of Emergency in 2007.

In late 2008, a meetup event in Lahore was organized on Facebook in only three days, according to post-event reports by participants. It was held at the Lahore University of Management Sciences, a site with historical significance for many Pakistani bloggers because it was the scene of mass student protests during the 2007 state of emergency. Word of the event spread on Twitter under the RSS hashtag “#LBM08.” More recently, bloggers and other Internet users met in Karachi on 26 July to explore and share knowledge about Twitter. Participants discussed how Twitter could be used in Pakistan’s socio-political environment and explored potential ways to avoid possible access or censorship restrictions in the future and “talked extensively” about what to do if a situation similar to that in post-presidential elections Iran arose in Pakistan.