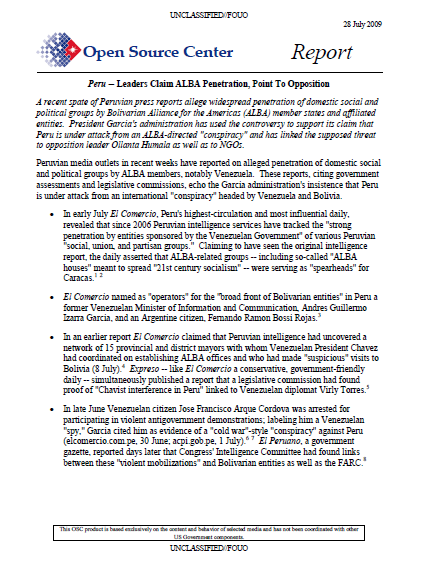 A recent spate of Peruvian press reports allege widespread penetration of domestic social and political groups by Bolivarian Alliance for the Americas (ALBA) member states and affiliated entities. President Garcia’s administration has used the controversy to support its claim that Peru is under attack from an ALBA-directed “conspiracy” and has linked the supposed threat to opposition leader Ollanta Humala as well as to NGOs.

Peruvian media outlets in recent weeks have reported on alleged penetration of domestic social and political groups by ALBA members, notably Venezuela. These reports, citing government assessments and legislative commissions, echo the Garcia administration’s insistence that Peru is under attack from an international “conspiracy” headed by Venezuela and Bolivia.