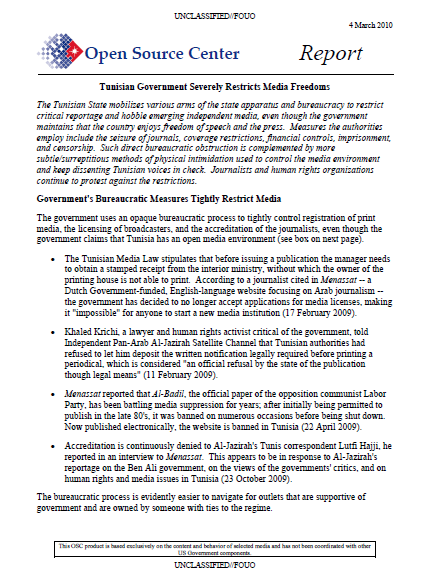 The Tunisian State mobilizes various arms of the state apparatus and bureaucracy to restrict critical reportage and hobble emerging independent media, even though the government maintains that the country enjoys freedom of speech and the press. Measures the authorities employ include the seizure of journals, coverage restrictions, financial controls, imprisonment, and censorship. Such direct bureaucratic obstruction is complemented by more subtle/surreptitious methods of physical intimidation used to control the media environment and keep dissenting Tunisian voices in check. Journalists and human rights organizations continue to protest against the restrictions.

The government uses an opaque bureaucratic process to tightly control registration of print media, the licensing of broadcasters, and the accreditation of the journalists, even though the government claims that Tunisia has an open media environment (see box on next page).

The bureaucratic process is evidently easier to navigate for outlets that are supportive of government and are owned by someone with ties to the regime.

Article 8 of the Tunisian Constitution states: “The liberties of opinion, expression, the press, publication, assembly, and association are guaranteed and exercised within the conditions defined by the law.” The state maintains the view that Tunisia enjoys freedom of speech and the press. This is reflected in comments made by high level government officials.

Once media outlets have crossed the barriers necessary for accreditation, those outlets critical of the Ben Ali regime are also subject to confiscation.

In addition to overt media censorship, the government’s bid to completely control media in Tunisia included the takeover of the country’s nongovernmental press body and extended as far as censuring a government minister.