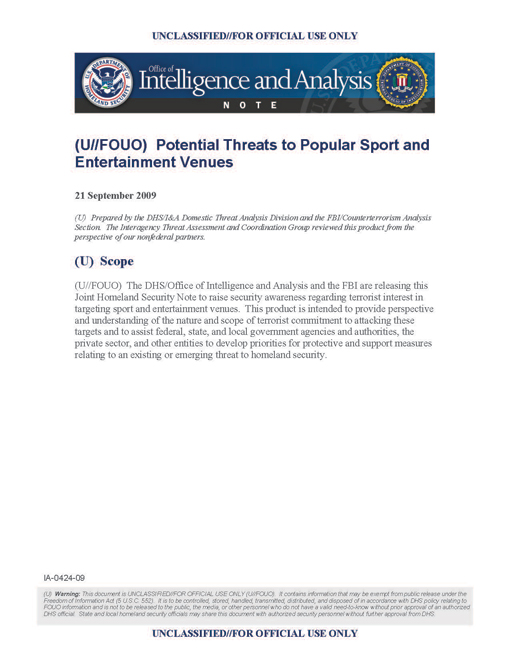 (U//FOUO) The DHS/Office of Intelligence and Analysis and the FBI are releasing this Joint Homeland Security Note to raise security awareness regarding terrorist interest in targeting sport and entertainment venues. This product is intended to provide perspective and understanding of the nature and scope of terrorist commitment to attacking these targets and to assist federal, state, and local government agencies and authorities, the private sector, and other entities to develop priorities for protective and support measures relating to an existing or emerging threat to homeland security.

(U//FOUO) Al-Qa‘ida could meet standing objectives of inflicting mass casualties, economic damage, and psychological impact with an attack against a stadium or arena filled with spectators.

(U) The Terrorist Threat

(U//FOUO) International, domestic, and lone-wolf terrorists have considered stadiums and arenas as targets. The open access such facilities afford makes them easier to attack than hardened facilities with more extensive security measures. In addition, occupied stadiums and arenas provide the opportunity to achieve principal objectives such as mass casualties, economic damage, and psychological impact.

(U//FOUO) The Al-Qaeda Training Manual specifically lists “…blasting and destroying the places of amusement, immorality, and sin…and attacking vital economic centers” as a key objective. DHS/I&A and the FBI assess that, based on this guidance, al-Qa‘ida operatives and other terrorists who invoke Islam to use, support, or facilitate violence or other illegal conduct probably view occupied stadiums and arenas as desirable targets.

(U) Scenarios of Concern

(U//FOUO) DHS/I&A and the FBI are not aware of any current terrorist plots to attack stadiums and arenas in the United States. Nonetheless, analysis of detained operatives’ statements, captured material, and domestic and overseas terrorist attacks indicates that these facilities are potential targets. Previous attacks against crowded gatherings by al-Qa‘ida and affiliated groups and domestic terrorists have featured improvised explosive devices (IEDs) and vehicle-borne improvised explosive devices (VBIEDs), tactics that also are applicable to many stadiums and arenas. Detained terrorists also have discussed the use of aircraft and chemical weapons to attack stadiums and arenas.

(U//FOUO) An attack on an occupied stadium or arena using IEDs and VBIEDs could inflict immediate casualties and destruction, create fear and panic among survivors, and paralyze nearby businesses. Moreover, a high-profile attack against a well known stadium or arena would generate the extensive media attention al-Qa‘ida seeks.

(U//FOUO) Convicted al-Qa‘ida operative Dhiren Barot conducted extensive casing of banking, finance, and commercial buildings in the United States; his conclusions regarding the most applicable tactics, techniques, and procedures for attacking such facilities would also apply to stadiums and arenas.

— (U//FOUO) Barot’s casing reports cited use of a delivery truck or limousine as the preferred method of attack because, in his judgment those types of vehicles would not attract undue attention or suspicion by security personnel. Many such vehicles are present at large sporting and entertainment events and could mix easily with legitimate vehicles.

— (U//FOUO) Barot’s reporting also noted the level of pedestrian traffic and the peak hours when large crowds congregated in front of a building. Terrorists planning an attack on a stadium or arena could easily time it for peak periods when large numbers of spectators are entering or leaving.

(U//FOUO) Barot’s casing reports contained pamphlets and information about private helicopter companies and heliports, suggesting he considered use of helicopters as a potential method for attacking crowded venues.

— (U//FOUO) A terrorist-piloted helicopter or small aircraft potentially could blend in with media or VIP helicopters or advertising banner airplanes often present at stadium events, for example, to deliver an explosive device that could generate the mass casualties, fear, and extensive media coverage desired by terrorists.

(U) DHS and the FBI encourage recipients of this document to report information concerning suspicious or criminal activity to DHS and the FBI. The DHS National Operations Center (NOC) can be reached by telephone at 202-282-9685 or by e-mail at NOC.Fusion@dhs.gov. For information affecting the private sector and critical infrastructure, contact the National Infrastructure Coordinating Center (NICC), a subelement of the NOC. The NICC can be reached by telephone at 202-282-9201 or by e-mail at NICC@dhs.gov. The FBI regional phone numbers can be found online at http://www.fbi.gov/contact/fo/fo.htm. When available, each report submitted should include the date, time, location, type of activity, number of people and type of equipment used for the activity, the name of the submitting company or organization, and a designated point of contact.