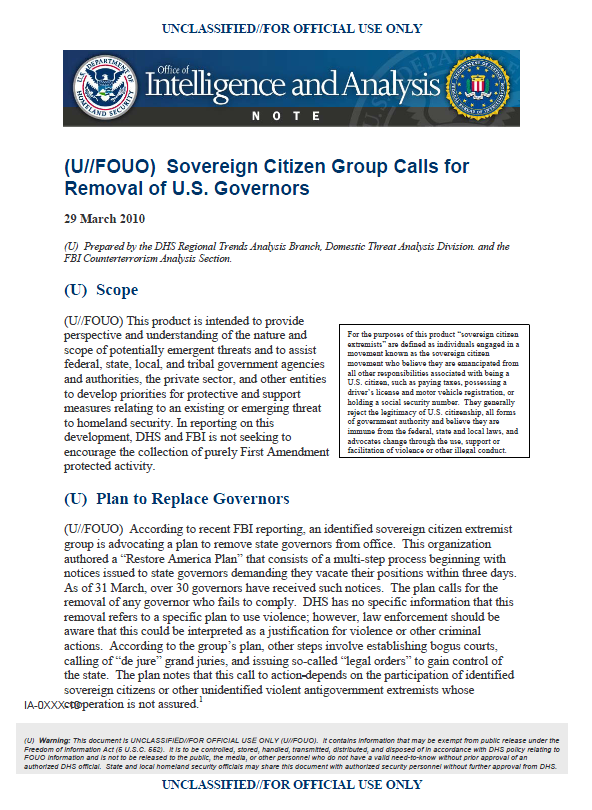 (U//FOUO) This product is intended to provide perspective and understanding of the nature and scope of potentially emergent threats and to assist federal, state, local, and tribal government agencies and authorities, the private sector, and other entities to develop priorities for protective and support measures relating to an existing or emerging threat to homeland security. In reporting on this development, DHS and FBI is not seeking to encourage the collection of purely First Amendment protected activity.

(U) Plan to Replace Governors

(U//FOUO) According to recent FBI reporting, an identified sovereign citizen extremist group is advocating a plan to remove state governors from office. This organization authored a “Restore America Plan” that consists of a multi-step process beginning with notices issued to state governors demanding they vacate their positions within three days. As of 31 March, over 30 governors have received such notices. The plan calls for the removal of any governor who fails to comply. DHS has no specific information that this removal refers to a specific plan to use violence; however, law enforcement should be aware that this could be interpreted as a justification for violence or other criminal actions. According to the group’s plan, other steps involve establishing bogus courts, calling of “de jure” grand juries, and issuing so-called “legal orders” to gain control of the state. The plan notes that this call to action depends on the participation of identified sovereign citizens or other unidentified violent antigovernment extremists whose cooperation is not assured.

(U//FOUO) A small number have of sovereign citizen extremists have armed themselves and resorted to violence to defend their perception of the rights of freedom and citizenship to which they believe that they are entitled. Occasionally, these groups have engaged in violent confrontations with government officials, particularly law enforcement, to help promote their goals. Sovereign citizen extremists have been implicated in the deaths of several police officers, including one in which a sovereign citizen extremist shot to death three officers in two separate incidents. In general, however, they have pursued nonviolent means to meet their goals. Specific tactics include issuing phony tax filings, form 1099s or other bogus financial documents designed to intimidate or defraud targeted individuals, private institutions, or government entities. They often draw up “criminal indictments” against publicly elected officials, file fraudulent property liens, print bogus checks and counterfeit money orders, and issue “declarations of sovereignty.”

(U//FOUO) DHS/I&A and FBI are not aware of any immediate threats to specific governors from sovereign citizen and antigovernment extremist groups. We are concerned however, that unidentified individuals could attempt to follow through with this call to action through violent and criminal means.