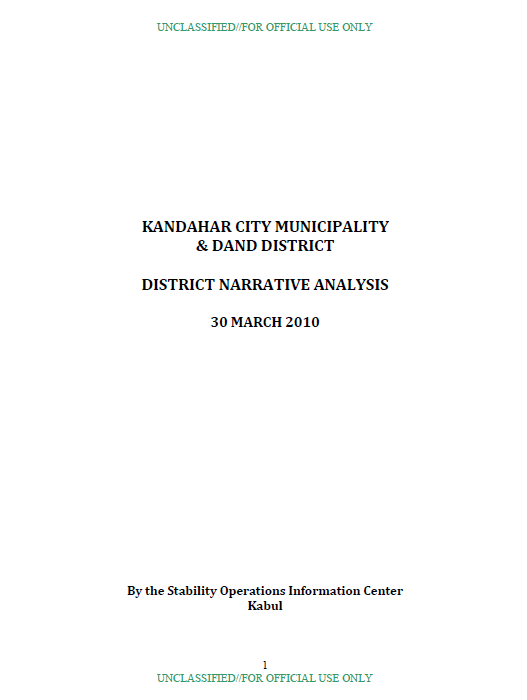 1. (U) Public Support for the Taliban is Weak. Despite a decline in public confidence in the government and coalition forces over the past few years in Kandahar City, atmospherics and polling data suggest the people of Kandahar City are still predisposed to support the government—they just need to be convinced that it will take hold. Similarly, it does not appear that separating insurgents from the population is a core concern inside Kandahar City. While the insurgency is quite capable of carrying out acts of violence in Kandahar City and intimidating the population, the insurgency enjoys little popular sympathy. For more on public perceptions and atmospherics in Kandahar City, start reading from p. 8.

2. (U//FOUO) Taliban Assassinations of Officials are Effective and Poised to Continue. While the insurgency may not be an attractive alternative in the eyes of Kandaharis, it has succeeded in creating an atmosphere of fear in Kandhar City through an effective and ongoing campaign of suicide bombings and assassinations. Many government officials have barricaded themselves against the violence. Whether the Taliban have the will or ability to expand their campaign of violence in the city remains unclear, with compelling evidence for and against the case. For details on the Taliban’s assassination campaign and the state of insurgency in Kandahar City, see pp. 62-67.

3. (U) Recent Civilian Casualties Have Damaged ISAF. Stories of civilian casualties in Uruzgan and Helmand in February 2010 had a clear and widespread negative impact on Kandahar residents’ attitudes toward international forces. Though the casualties occurred in other provinces, the effects felt by patrolling ISAF troops in Kandahar City included having rocks thrown at them by residents and, in a couple of cases, being spit upon. The negative feelings were not limited to Afghan civilians. Afghan National Police officials in Kandahar City repeatedly brought up the civilian casualties in the Uruzgan air strike with their American police mentors. For more on this subject, see p. 13.

4. (U//FOUO) Gul Agha Sherzai’s Ambitions. Gul Agha Sherzai, governor of Nangarhar Province, has signaled his desire to reassert his influence in Kandahar and establish himself as the key powerbroker for southern Afghanistan. He made a public visit in February, offering himself as someone who could broker a peace deal with the Taliban. But he has reportedly said he would not seek to return to Kandahar as long as his political rival Ahmad Wali Karzai presides over the province’s affairs. For more on this subject, see pp. 19-20. 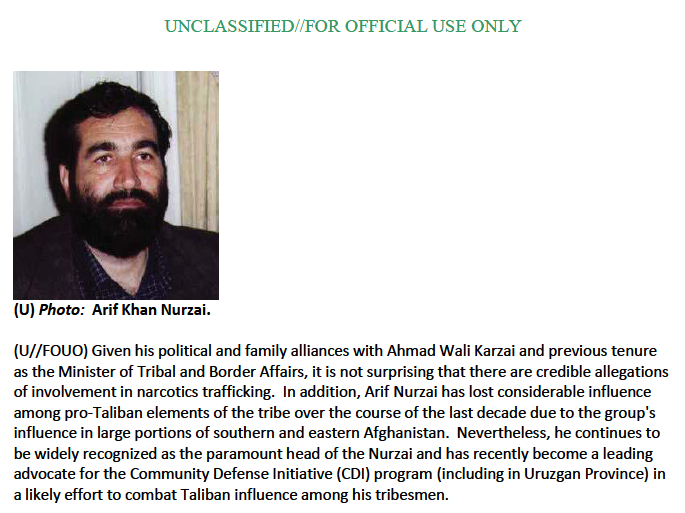