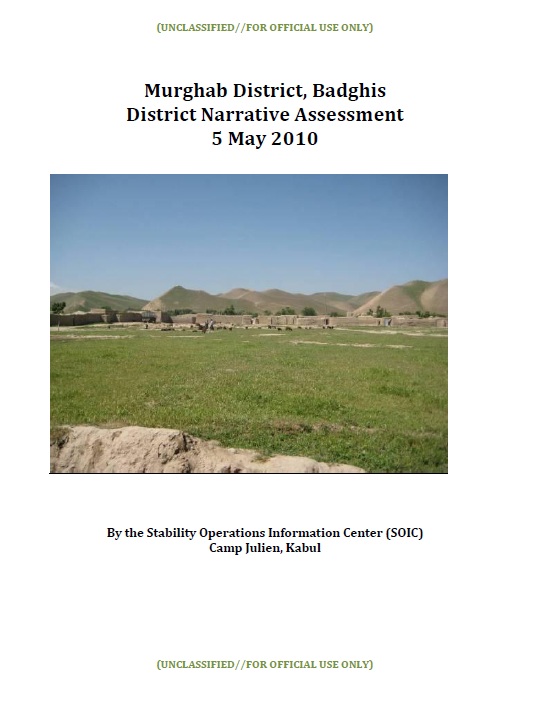 (U) (Analyst’s note: This section, called “Key Findings”, is designed to provide decision-makers with important analytical insights culled from the overall document. In this sense, it is a form of executive summary, though it does not seek to summarize all the sections of this document, since the document is designed to be used as a reference.)

(U) There is a latent fear of Tajik government officials in District Capital. The Murghab Pashtuns live on land that prior to the turn of the century belonged to Tajiks and Aimaqs. While the Pashtuns have been entrenched for over a century, there is a latent fear (however unrealistic) that Tajik authorities will reclaim the Murghab river valley. This perception is aided by the disproportionate influence Tajik officials have in the Badghis government and the Tajik militias that operate along the Tajik/Pashtun fault line that runs through Muqur and Qadis districts south of Murghab. The Tajiks’ integration into the Communist Party during the Soviet occupation further alienated the Tajik elites from the Pashtun population and stories of Tajik atrocities prior to and after the fall of the Taliban in 2001 (although somewhat apocryphal) still carry special resonance among the population. In this light any action taken by the provincial government, which is dominated by Tajiks, will be viewed not along governance lines, but rather along ethnic schisms. Therefore, special care must be given to obtaining Pashtun buy-in in any effort launched by the provincial government. Government actions must be perceived to be done with the population and not to the population.

(U) The population of Murghab is war-weary. After decades of ethnic & ideological attacks and reprisals, Murghabis are significantly weary of conflict. District leadership stated popular support for Coalition Forces is eroded by shows of force such as helicopter flights in the valley, searches, and raids by patrols. The result of this war-weariness is that rather than asserting any form of self-determination, the local population tends to side with whomever they perceive to be the strongest in their particular village. Those in Taliban controlled areas tend to support the Taliban and those in Coalition controlled areas tend to support the coalition/Government of the Islamic Republic of Afghanistan (GIRoA). However, this support is moderated by a healthy skepticism and latent distrust. For example, the population of Ludina, a village which is under Coalition Forces control, is reportedly pro-GIRoA, however upon questioning by the Human Terrain Team, they expressed significant apprehension of both GIRoA and the Taliban. This suggests that in order to achieve a lasting stability in Murghab Valley, a tipping point will need to be reached where the majority of the population believes that Coalition Forces will sustainably wrest the upper hand from the Taliban.

(U) Separating the insurgent from the population in Murghab is a fallacy. The insurgency in the Murghab Valley is drawn from the local population. It consists of local Pashtuns who engage in violence primarily to secure economic interests. None of the current members of the Taliban were active in the movement prior to 2001 and there is only a modicum of ideological motivation. Murghabi insurgents employ (tactics, techniques and procedures) TTPs that differ significantly from TB in the rest of the country, despite prodding from Taliban Senior Leadership to engage in more traditional operations. The population views the Taliban as “their crazy uncle—you don’t always agree with him, but at the end of the day he is family.” The fact that the Taliban in Murghab is financially vice ideologically motivated suggests that they can be co-opted, especially if their economic interests can be legitimized or supplanted with licit trade options.

(U) Local government will be hard-pressed to keep up with any significant clear/hold operations. The district government of Bala Murghab is struggling to govern the 20km diameter security bubble effectively. From a security standpoint, the ANSF will struggle to hold secure ground as ISAF forces continue to spread their presence up and down the Murghab Valley. From a governance standpoint, decision-making, lack of local capacity and a reliance on less-than-responsive provincial government in Qala-e Now result in significant impairment in the provision of basic services.

(U//FOUO) Murghab District is a significant poppy cultivation and opiate trafficking region, largely due to its poor, agriculture-based economy and the presence of Taliban forces encouraging cultivation.

(U) According to a 2010 United Nations Office on Drugs and Crime (UNODC) opium survey, Badghis Province emerged as a major poppy cultivation area in 2009, growing 5,411 hectares of poppy. This marks an 822% increase in opium cultivation over the previous year. The study specifically cites neighboring Jawand district and Murghab as being the main poppy growing districts in the province. While Badghis cultivated less than 10% of Helmand’s overall output (69,833 hectares), it was the fifth-most productive poppy cultivating province in the country. The UNODC survey conflicts with observations made by Coalition Forces who report noticing very little, if any, poppy cultivation in the Murghab River Valley.