(U//FOUO) Threats of Violence Towards Lawmakers Over Healthcare Reform 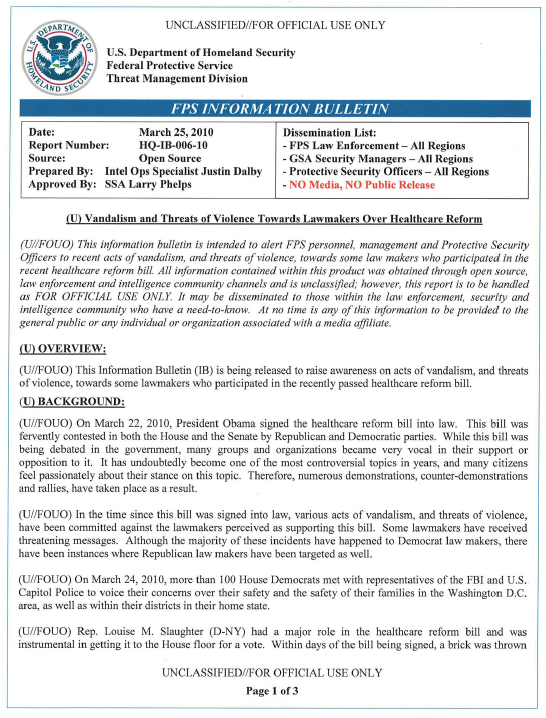 (V) Vandalism and Threats of Violence Towards Lawmakers Over Healthcare Reform

(U//FOUO) This information bulletin is intended to alert FPS personnel, management and Protective Security Officers to recent acts of vandalism, and threats of violence, towards some law makers who participated in the recent healthcare reform bill. All information contained within this product was obtained through open source,
law enforcement and intelligence community channels and is unclassified; however, this report is to be handled as FOR OFFICIAL USE ONLY It may be disseminated to those within the law enforcement, security and intelligence community who have a need-to-know. At no time is any of this information to be provided to the general public or any individual or organization associated with a media affiliate.

(U//FOUO) This Information Bulletin (IB) is being released to raise awareness on acts of vandalism, and threats
of violence, towards some lawmakers who participated in the recently passed healthcare reform bill.

(U//FOUO) On March 22, 2010, President Obama signed the healthcare reform bill into law. This bill was fervently contested in both the House and the Senate by Republican and Democratic parties. While this bill was being debated in the government, many groups and organizations became very vocal in their support or opposition to it. It has undoubtedly become one of the most controversial topics in years, and many citizens feel passionately about their stance on this topic. Therefore, numerous demonstrations, counter-demonstrations and rallies, have taken place as a result.

(U//FOUO) In the time since this bill was signed into law, various acts of vandalism, and threats of violence, have been committed against the lawmakers perceived as supporting this bill. Some lawmakers have received threatening messages. Although the majority of these incidents have happened to Democrat law makers, there have been instances where Republican law makers have been targeted as well.

(U//FOUO) On March 24, 2010, more than 100 House Democrats met with representatives of the FBI and U.S. Capitol Police to voice their concerns over their safety and the safety of their families in the Washington D.C. area, as well as within their districts in their home state.

(U//FOUO) Rep. Louise M. Slaughter (D-NY) had a major role in the healthcare reform bill and was instrumental in getting it to the House floor for a vote. Within days of the bill being signed, a brick was thrown through the window of her Niagara Falls district office. She has also received a voicemail message referring to sniper attacks.

(U//FOUO) Rep. Bart Stupak (D-MI) received a fax with a drawing of a noose, as well as a voicemail saying, “You’re dead. We know where you live. We’ll get you.” Rep. Stupak took part in last-minute negotiations that barred federal funding of abOitions, thus helping to secure the passage of the bill.

(U//FOUO) A vocal Tea PaIty activist, posted what he believed was Rep. Tom Perriello’s (D-VA) Charlottesville home address on a Web site and urged opponents to “drop by” to show opposition to his support of the bill. The address turned out to be Perriello’s brother who returned to his house on Tuesday and smelled gas inside. After searching, he discovered that the line to the propane tank on his gas grill had been cut. That same day, a letter containing “threatening language” was sent to his home.

(U//FOUO) The campaign office of Rep. Eric Cantor (R-VA) was shot at and a bullet went through one of the windows. In addition to the shooting, Rep. Cantor also states that he has been receiving “threatening e-mails”.

(U//FOUO) The office of Rep. Jean Schmidt (R-OH) has received a profanity laced voicemail. The caller also accused the Republican PaIty of being racist.

(U//FOUO) These types of criminal acts have been happening throughout the country and are likely to continue in the near term due to the controversial topic and a heightened public interest.

(U//FOUO) An increase of demonstrations at or near the office spaces of law makers may occur without advanced notice. Therefore, law enforcement personnel must continue to be alert and be able to react to a situation. Previous healthcare reform demonstrations have generally been conducted without incident, but due to the rising sentiment on both sides, some type of incident could occur. Demonstrators may try to generate media attention by various tactics such as civil disobedience and/or trying to engage law enforcement personnel to provoke a response.

(U//FOUO) Research has not identified any credible threats specifically directed at federal facilities. However, due to these random occurrences happening all over the country, law enforcement and security personnel should remain vigilant and report any suspicious activity in, and around, federal buildings and assets.

(U//FOUO) Law Enforcement and security personnel are advised to report any suspicious activity in, and around, federal buildings. They are also advised to review the force protection measures found in this IB and apply them in the performance of their everyday duties to enhance the protection of federal facilities.