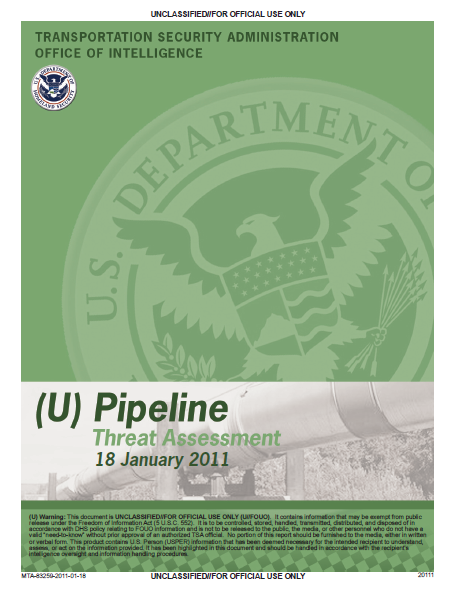 (U//FOUO) The Transportation Security Administration’s (TSA’s) mission includes enhancing the security preparedness of U.S. hazardous liquid and natural gas pipeline systems. This TSA Office of Intelligence (TSA-OI) threat assessment primarily addresses the potential for attacks against the pipeline industry in the Homeland and assesses the tactics, techniques, and procedures (TTPs) used in attacks against pipelines and related infrastructure overseas for their potential use by terrorists in the Homeland.

(U//FOUO) Oil and natural gas pipeline system operations rely heavily on industry control systems (ICSs) including supervisory control and data acquisition (SCADA) networks (see text box). Terrorist groups have discussed attacks on unspecified SCADA systems, but it is uncertain whether al-Qa’ida or any other group has the capability to conduct a successful cyber attack.19 TSA-OI is not aware of any credible, specific threat reporting targeting U.S. pipelines’ industry control systems or the supervisory control and data acquisition networks.

(U) Sept 2010: The Iranian Government confirmed a cyber attack against the industrial control system at the Busher Nuclear Plant in Iran, which led to the discovery of a malicious software program, the origin of which is still unknown. Dubbed Stuxnet, analysts determined the worm began infecting systems overseas and in the U.S. beginning as early as June 2009. The Busher Nuclear Plant uses SCADA systems to operate.20 Although the impact of the attack on plant operations has not been publicly released, officials for the plant insist that the malicious program affected only the personal computers of a few workers.

(U) SCADA is a category of software application program for process control, and allows for the gathering of data in real time from remote locations in order to control equipment and conditions. SCADA is used in power plants as well as in oil and gas refining, telecommunications, transportation, and water and waste control.

(U//FOUO) The vast majority of suspicious activity reports (SARs) in the Homeland involved refineries or related infrastructure; not pipelines. U.S. pipelines and related infrastructure however, have been the objects of vandalism and tampering, particularly those facilities and equipment located above ground. There were 44 suspicious pipelines, and related oil and natural gas SARs reported to TSA-OI from January 2010 to October 2010.21 Suspicious activities near pipelines and related infrastructure may indicate an interest to collect information for a future attack, or the desire to identify vulnerabilities or test a pipeline facility’s security and response operations. Individuals engaged in surveillance activities are rarely interviewed by authorities because they are seldom detained for questioning. Therefore, gauging their intent or motivations is difficult.