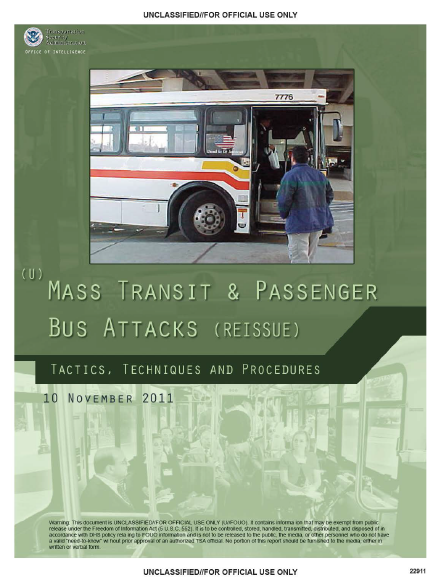 This is one in a series of products released since 2010 focusing on the TTPs used to attack mass transit systems. This assessment was produced to help security managers and stakeholders evaluate the effectiveness of and vulnerabilities in mass transit bus security programs, plans, and activities.

(U//FOUO) TSA’s Office of Intelligence (TSA-OI) assesses that although counterterrorism pressure has weakened al-Qa’ida (AQ) and al Qa’ida in the Arabian Peninsula (AQAP), both organizations represent an enduring and evolving threat and remain committed to attacking the Homeland, including the transportation sector. Both organizations have targeted commercial aviation and AQ has repeatedly plotted to attack mass transit. We also remain concerned about the threat posed by homegrown violent extremists (HVE) or lone offenders inspired by AQ’s violent extremist ideology to launch attacks against less secure targets, such as mass transit and passenger bus systems.

(U//FOUO) Tactics, techniques, and procedures used by terrorist groups worldwide could serve as a model for an attack in the Homeland. The current threat level for the mass transit sector remains at medium.

• (U//FOUO) Terrorist groups have used a wide variety of weapons and tactics in attacks on mass transit bus systems; improvised explosive devices (IEDs) have been the most common weapon used.

• (U//FOUO) Most IED attacks against mass transit bus systems occurred inside the bus and not on the bus routes or at bus stations.

• (U//FOUO) Terrorists appeared to use multiple IEDs in attacks to increase the number of casualties or target first responders.

• (U//FOUO) The number of terrorist attacks on mass transit bus systems remained consistent throughout the year, without any major increases in any particular month.

• (U//FOUO) TSA-OI’s data review showed that most attacks occurred during the morning rush hour from 7 a.m. to 10 a.m., with the least amount of attacks occurring from 1 a.m. to 5 a.m.