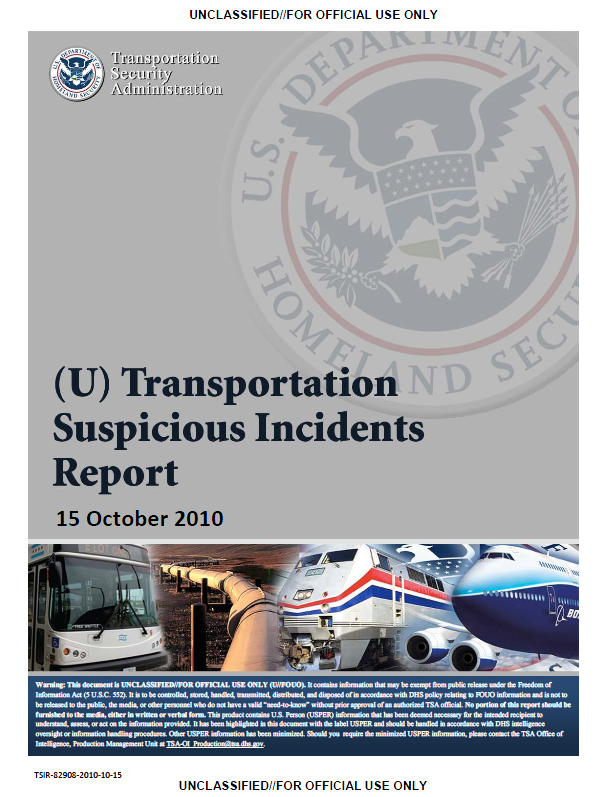 (U//FOUO) The Transportation Suspicious Incident Report (TSIR) provides a weekly comprehensive review of suspicious incident reporting related to transportation. The TSIR includes incident reporting, analyses, images, and graphics on specific incidents. In addition, selected articles focus on security technologies, terrorism, and the persistent challenges of securing the nation’s transportation modes. This product is derived from unclassified incident and law enforcement reporting and does not represent fully evaluated intelligence. Questions and comments may be addressed to the Transportation Security Administration, Office of Intelligence, Field Production Team at (703) 601-3142.

(U) Summary of Suspicious Incidents

(U//FOUO) Field reporting continues to capture incidents or activities in transportation modes that may be construed as suspicious – as defined by the Department of Homeland Security (DHS). For this reporting period, 23 incidents were considered suspicious.

(U//FOUO) New York: Suspicious Incident at John F. Kennedy International Airport. On 29 September, an identified passenger at John F. Kennedy International Airport (JFK) was approached by an individual in the sterile area and asked to carry a locked, black backpack onboard a flight (New York-San Francisco). The unidentified individual stated that he did not have enough money for the flight and offered the passenger money to transport the backpack for him. The passenger refused the request and reported the incident to the airline gate agent. Local Law Enforcement Officers (LEOs) responded and interviewed the passenger who repeated his story and provided a description of the unidentified man. TSA and the airline reviewed closed-circuit television (CCTV) tapes and observed the gate area in an attempt to locate and identify the suspicious individual with no success.

(U//FOUO) According to the Field Intelligence Officer at JFK, further identification of the individual was not possible as his face was not visible on CCTV cameras at the airport. While an investigation into this incident continues, it is not yet known if the individual was a ticketed passenger, or how he entered the sterile area.

(U//FOUO) TSA Office of Intelligence Comment: In this instance, the solicitation of the passenger was done in the sterile area, suggesting the individual and item in question should have been screened at the passenger screening checkpoint. The investigation continues to determine if this occurred. Transportation security personnel are reminded that there have been incidents in the past where unwitting passengers have been duped into carrying items that were later found to conceal weapons, and in at least one instance, an improvised explosive device (IED). On 21 December 1988, an IED planted in unaccompanied baggage exploded onboard Pan Am 103 over Lockerbie Scotland, killing 259 passengers and crew as well as 11 people on the ground. [Sources: TSA-09-10316-10; TSA Field Intelligence Officer JFK; Open Source Research]

(U//FOUO) United States, Mexico: Drug Traffickers Use Trucking Program to Transport Illicit Cargo. Reporting assessing vulnerabilities of the Customs-Trade Partnership Against Terrorism (C-TPAT) Program highlights drug trafficker use of C-TPAT companies in order to smuggle drugs across the border. The CBP Office of Intelligence and Operations Coordination reported that border seizure statistics do not reveal a pattern suggesting targeted operations.

(U) Customs-Trade Partnership Against Terrorism Overview

(U) C-TPAT offers U.S. and foreign companies shorter wait times and fewer inspections at U.S. ports of entry in exchange for enhanced security measures prior to arriving at the border as well as an on-site review of supply chain security procedures. C-TPAT companies can become Free and Secure Trade (FAST)-certified to use designated FAST lanes that provide these benefits.

(U//FOUO) Drug traffickers also have been known to hijack and clone legitimate commercial trucks to transport illicit cargo across the border. According to a highway cargo trade group, in 2010, criminals hijacked over 10,000 commercial trucks in Mexico.

(U//FOUO) Although DHS Office of Intelligence and Analysis (I&A) lacks evidence that drug trafficking organizations are able to clone FAST-certified trucks, it remains a concern for the private sector. DHS I&A “…believes the possibility that drug traffickers can use FAST-certified trucks remains low based on the numerous requirements for certification.” That said, DHS I&A cannot discount the potential threat based on widespread cloning by drug traffickers of other commercial trucks.

(U//FOUO) DHS Information Bulletin: Al-Qa’ida Threat to Europe. On 3 October, the U.S. Department of Homeland Security (DHS) and the Federal Bureau of Investigation (FBI) published a Joint Intelligence Bulletin in response to the heightened threat environment in Europe, as well as actions European governments have taken to increase surveillance and to guard against potential terrorist attacks. At this time, there is no indication that the reported threat is directed specifically toward the United States, its citizens, or infrastructure; however, DHS assesses that al-Qa‘ida and its affiliates continue to plot against the Homeland and U.S. allies.

(U//FOUO) Previous al-Qa’ida terrorist plots, such as the organization’s effort in August 2006 to bring down multiple transatlantic commercial airliners using liquid explosives, were initially assessed to be a Europe-focused attack. It was not until later in the investigation that it was revealed that the plot involved U.S. commercial aviation. In 2009 and 2010, investigators discovered previously unknown links between al-Qa’ida external operational planners and U.S. citizens inside the United States, including Najibullah Zazi (USPER), David Coleman Headley (USPER), and Raja Khan (USPER). Based on these instances, DHS continues to operate under the premise that al-Qa’ida and like-minded terrorist groups are determined to recruit and place terrorist operatives inside the United States and that attacks could occur with little or no warning.

(U//FOUO) In recent years, Europe has been the target of a variety of attacks by al-Qa‘ida and other extremist groups. Many of these attacks focused on the general public, not military installations or government institutions. DHS assesses that the scale and complexity of an attack are dependent upon a variety of factors, to include the sophistication and training of the attackers, the parameters of their targets, and the local security environment.
• (U//FOUO) June 2007: Two men crashed a vehicle loaded with compressed gas cylinders into the doors of Glasgow International Airport’s main terminal, setting fire to the entrance.
• (U//FOUO) July 2005: British authorities reported four suicide bomb blasts during the morning rush hour. Three of the attacks were within London’s underground train system and the fourth attack occurred on a city bus, killing 52 people and injuring approximately 700.
• (U//FOUO) March 2004: 10 bombs hidden in sports bags exploded on four commuter trains during the morning rush hour in Madrid, Spain, killing 191 people and wounding approximately 1,700. A Europe-based group claiming affiliation with al-Qa‘ida claimed credit for the attack. [Source: DHS] 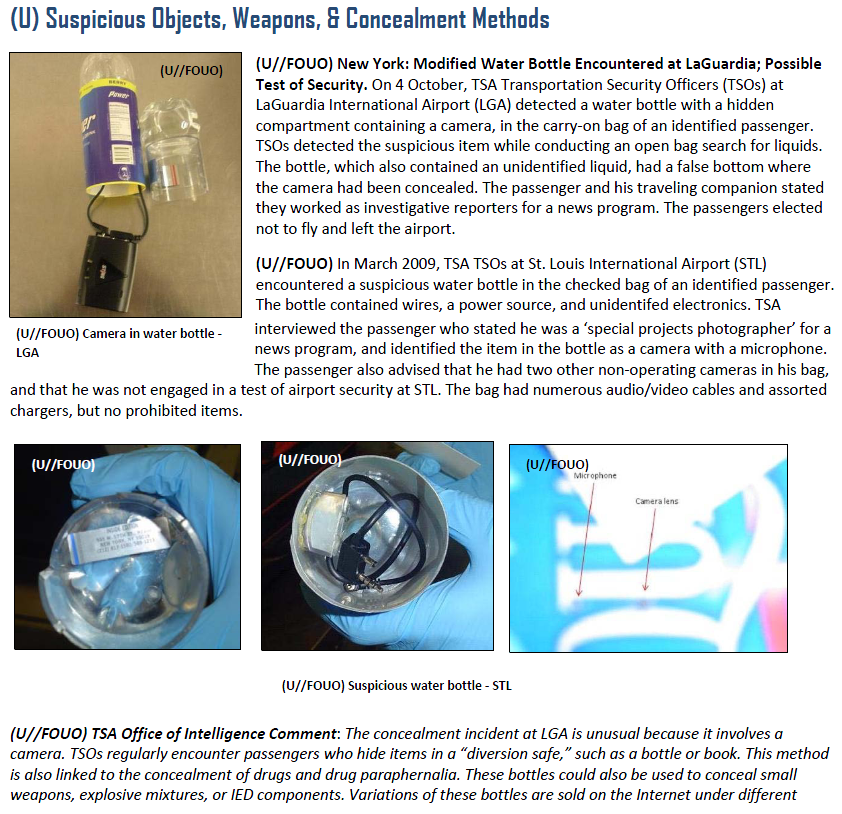