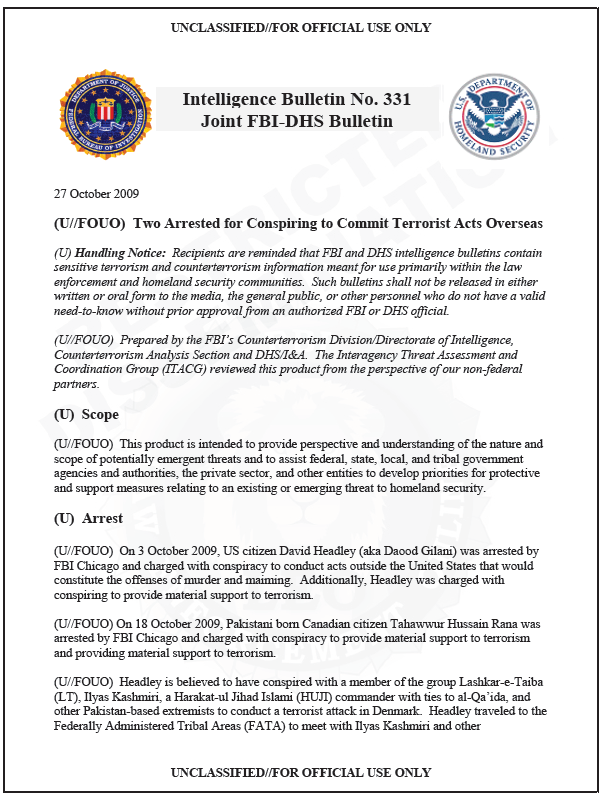 (U//FOUO) This product is intended to provide perspective and understanding of the nature and scope of potentially emergent threats and to assist federal, state, local, and tribal government agencies and authorities, the private sector, and other entities to develop priorities for protective and support measures relating to an existing or emerging threat to homeland security.

(U//FOUO) On 3 October 2009, US citizen David Headley (aka Daood Gilani) was arrested by FBI Chicago and charged with conspiracy to conduct acts outside the United States that would constitute the offenses of murder and maiming. Additionally, Headley was charged with conspiring to provide material support to terrorism.

(U//FOUO) Headley is believed to have conspired with a member of the group Lashkar-e-Taiba (LT), Ilyas Kashmiri, a Harakat-ul Jihad Islami (HUJI) commander with ties to al-Qa’ida, and other Pakistan-based extremists to conduct a terrorist attack in Denmark. Headley traveled to the Federally Administered Tribal Areas (FATA) to meet with Ilyas Kashmiri and other conspirators. The target of the attack is believed to be the Jyllands Posten, the newspaper which initially printed cartoons in 2005 depicting the Prophet Muhammad in a violent context and was deemed as extremely offensive in the Muslim world. As part of the conspiracy Headley is believed to have conducted significant preoperational activities in furtherance of that attack. Rana assisted Headley in his preoperational activities by helping to conceal the nature of his activities and facilitating some of his travel to conduct surveillance and facilitating travel to meet with fellow conspirators in Pakistan.

(U//FOUO) Despite Headley and Rana’s actions in furtherance of possible terrorist attacks overseas, the FBI and DHS are not aware of any current plotting against specific targets within the Homeland; nonetheless, we encourage our homeland security partners to remain vigilant and report any suspicious activities.

(U//FOUO) Please note these arrests are unrelated to recent disruptions in New York, Texas, Boston, and Illinois. For further information regarding the investigation and the charges filed against Headley and Rana see the attached criminal complaint.