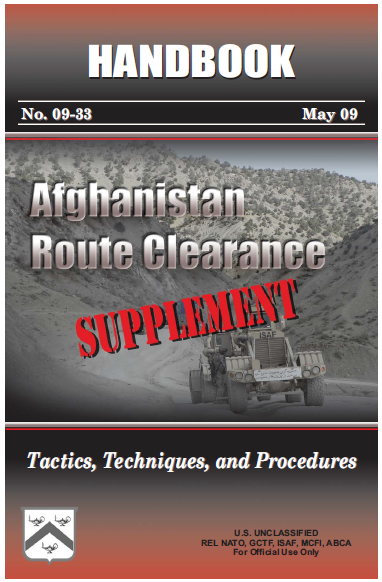 Route clearance (RC) operations for Operation Enduring Freedom in Afghanistan are much different from RC operations for Operation Iraqi Freedom in terms of the terrain, seasonal weather, level of infrastructure, volume of insurgent threats, sources of improvised explosive device (IED) components, and motivation for IED emplacement. The purpose of this supplement is to focus on RC in Afghanistan.

Some AOs are further subdivided into minor AOs; however, the minor AOs do not necessarily correspond to the provincial boundaries. AO Currahee is composed of Team (TM) Paktya, TM Khowst, TM Eagle, and TM White Eagle. AO Duke is composed of AO Raptor, AO Pacesetter, AO King, AO Rock, and AO Saber. AO Warrior, AO Ghazni, and AO Spartan are not broken down into minor AOs.

Some areas are extremely mountainous, and the so-called roads are nothing more than narrow goat trails, which offer insurgent forces excellent cover and concealment from approaching maneuver forces. There are many ideal spots for ambush near to the roads, and several IED events in these areas have coordinated small arms fire incorporated into the attacks. In other areas of the country, the terrain is wide open desert and without many hiding spots near the roads. The methods of attack in these areas are drastically different.

The weather in Afghanistan plays a major role in the way units conduct operations. The seasonal nature of the mountainous regions lends itself to a “survival season” and a “fighting season.” The survival season is primarily the winter months. Harsh winters offer extremely cold temperatures and large snow accumulations. In many areas, the snowfall makes the roads completely impassible and shuts off ground maneuvers completely in some parts of the country. The fighting season begins with the spring thaw and allows for movement in areas that were previously impassible due to the harsh winter conditions. This fighting season usually ramps up from the early spring to the beginning of summer. The summer weather can also be harsh. Hot, dusty, dry conditions will often limit the movement of forces not properly protected from the heat. In the fall, when the extreme heat has passed, IED activity sparks up again; however, it is usually not as intense as the spring fighting. Most people are focusing on preparing for the coming winter months and not on fighting.

Infrastructure or, more to the point, a lack of infrastructure is a major issue in Afghanistan. The vast majority of the roads in Afghanistan are unimproved and not well defined. Often the location of the road changes from season to season and from year to year. Flooding, washouts, rockslides, lack of infrastructure, discovery of a better/safer/faster/more direct path, and many other factors all contribute to the ever-changing network of trails and paths used for vehicular traffic. In some areas, drivers use dry riverbeds as primary roads during the dry season. These wide open “roads” can quickly become raging rivers during the spring thaw. In some areas, the roads are paved; however, many years of damage from tracked vehicles and explosions from previous wars have greatly degraded their serviceability. These paved roads are often limited to the main ring road and a few off shoots from that road.

The sources of IED components in Afghanistan are drastically different from those in Iraq. In Afghanistan, there are fewer components for making IEDs. A cache in Afghanistan usually does not meet the minimum requirements of a cache in Iraq. The enemy uses homemade explosives in IEDs in Afghanistan, which bring additional complications to the RC mission. Additionally, there are many existing minefields that are mistaken for IEDs. RC units should deal with these areas as minefields rather than IEDs. Sometimes the enemy transplants mines from the minefields to a roadway. In these situations, it is difficult to determine if the area is a part of a larger minefield and should be dealt with as such, or if the area is more like an IED and should be dealt with accordingly.

The motivations for using IEDs in Iraq and Afghanistan are similar in some areas and different in others. In the lowlands, which are primarily in the south and west, the enemy uses IEDs as an initiator for an attack and then again when targeting first responders or reactionary forces. In the highlands, which are primarily in the north and east, the enemy uses IEDs to shape an attack and limit mobility.

Afghan culture is a rich mix influenced by different ethnicities and languages. It is extremely difficult to generalize about an entire population; however, Afghans are typically friendly and hospitable. Their lives have been rife with conflict, and they can be stern. The Afghan’s belief that Allah controls all matters greatly influences his perceptions. This belief helps Afghans tolerate extreme physical hardship.

Approximately 44 percent of Afghans are Pashtun, about half of whom are of the Durrani tribal group and the other half of the Ghilzai group. Tajiks are the second largest ethnic group with 25 percent of the population, followed by Hazaras at 10 percent and Uzbeks at 8 percent. Other smaller groups, including Turkmen, Qizilbash, Kazakhs, Aimaq, Wakhis, Nuristanis, Baluchis, Kyrgyz, Sikhs, Hindus, and Jews, constitute the remaining 13 percent of the total population.

The Afghans’ primary loyalty is to their families, kin groups, clans, or tribes; they express their identities through these groups. Their moral attitudes are often strict and inflexible, and they stress honor and individual responsibility to fulfill expected roles. Personal disputes are not resolved easily because of the need to protect one’s honor. Personal behavior affects family honor, so Afghans consider it essential to live according to these rigid rules. Piety and stoicism are admired traits.

Afghan society is mostly rural. The rural populations are mostly concentrated along the rivers. Villages in Afghanistan encircle larger towns that act as commercial, communication, and administrative centers. The most heavily populated and urban part of the country is between the cities of Kabul and Charikar. Other population concentrations can be found east of Kabul near Jalalabad, in the Heart oasis and the valley of the Harirud River in the northwest, and in the Valley of Kunduz River in the northeast. Most urban settlements have grown along the ring road that runs from Kabul southwest to Kandahar, then northwest to Herat, northeast to Mazar-e Sharif, and southeast to Kabul. Cities have formed where major routes intersect.

Thirty-two languages and dialects are spoken in Afghanistan. Dari (a form of Persian) is spoken widely and has several dialects. It is similar to the Farsi spoken in Iran and Tajik spoken in Tajikistan. Pashtu has two major variants and many dialects.