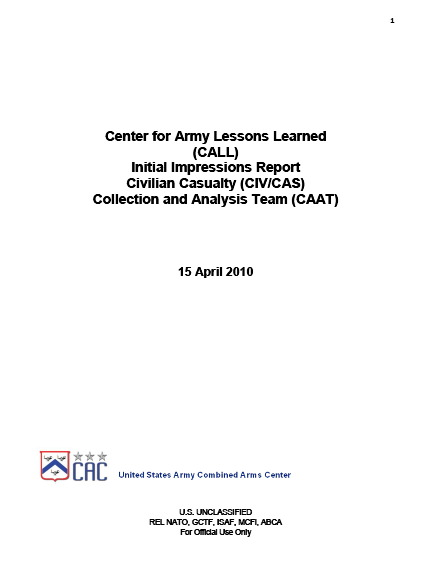 All units reported taking CIVCAS mitigation into account, there was mixed between those units with a formal SOP and those who applied the common sense standard to CIVCAS planning. All units had a standard for who conducted BDA and for most it was either the unit who caused the incident or the battle-space owning unit. Some units reported having the QRF with a dedicated mission to providing additional post CIVCAS response to any incident as required.

Many units found great benefit from inclusion of additional staff members (DOC, Physicians Assistant, SJA and Chaplain) into the planning process. Also, the incorporation of enablers (HTTs, CA, and PSYOPS) has also paid off during planning.

Some units found great benefit in conducting joint rehearsals and OPORDs along side with their ANSF counterparts. This not only helped in the training and mentoring of the ANSF, it also minimized the chances of an occurrence and helped clarify responsibilities and battle drill once an incident occurred. The rehearsals have shown to be more effective than the OPORDs because many times the ANSF may not grasp the full operation until they can walk through and deconflict along with the CF unit.

Another pre-operation method that has shown benefit has been to get a written “buy in” from the Provincial government or local village elders before an operation takes place. This shows them the respect that they as local leaders deserve and additionally provides credibility to the operation should a CIVCAS incident occur.

When it came to fires deconfliction, most all units had a plan for conduct of indirect fires. For counter battery units reported using either Falconview or PSSOF for CDE deconfliction. Units who reported firing counter IDF did conduct post fire BDA at the location.

Coalition Forces Risk Management: Most leaders indicated that they understood that any increased risk to CF was worth the effort avoid CIVCAS. Many leaders also reported feeling safer due to CIVCAS mitigation measures. Most felt that the ISAF driving policy and allowing local traffic to blend in did not significantly increase risk to their convoys, and many felt that it actually made them safer understanding that the enemy has many of the same CIVCAS concerns as we do and will avoid targeting convoys where civilians may be injured.

Enemy response: Some units did report that they did observe the enemy adapt to their mitigation measures. Sometimes insurgents would fire on CF units from areas where civilians where at hoping for an “over-reaction” to the situation and for CF to cause casualties. Other times the enemy would flee into a village or qalat. Many units found the best way to deal with this situation was to establish a soft cordon to contain the area and allow the ANSF to enter and conduct the searches. Other enemy responses where focused on negative IO effects following a CIVCAS. Some reports indicated that the enemy would quickly remove weapons from fighters in order to give the appearance that they were nothing more than a civilian. Others would send in “agitators” to confront Coalition Forces and attempt to enflame the situation and the local population. Additionally, one unit reported that they enemy within their AO began to understand their pattern for conducting a BDA within two hours of conducting counter IDF fires and used this to establish ambushes for CF. This was compounded by the restrictive terrain often found in the areas. This was mitigated by allowing commanders flexibility on how and when to conduct the BDA.

Local Impacts on CIVCAS: While it is commonly understood that all CIVCAS has a negative impact on the local population, there did not seem to be a majority consensus of which type had the most negative impact. Many leaders felt that it included women and children casualties. Others indicated that night raids seemed to have more effect as the local population feels a sense of insecurity when they cannot feel safe in their own homes at night. Some believed that incidents involving holy sites or texts (mosques, Quran) had a larger than normal impact on the population. This indicated to them that the CF has no regard for their culture, religion or way of life. Many units indicated that external units (SOF, transient convoys) had a greater impact than battle-space owning units, because they did not have a complete understanding of the area and local population. This can lead to a sense of distrust among the locals who may wonder how they can trust the CF and ANSF if they cannot even control who operates within their areas.

Post Incident Response: Units typically had a good post response plan to CIVCAS. Most units reported that they worked well with the ANSF and that they had no issue with them taking the lead. If the medical situation dictated they would evacuate the wounded to US facilities for treatment. But if not required some felt it better to keep them with the local facilities as it would be easier for their families to know where they are at and visit. Treatment of the dead was also an important issue with the units. If they are MEDEVAC’d out and die in US treatment it is essential to return them to their families in a prompt manner to facilitate burial. Many units reported the best way to accomplish this was through the ANSF or a local elder. Respect for the dead (civilian or insurgent) was an important theme through many of the units. Placing them into body bags and allowing their faces to be visible so that family may identify them was common.

When it came down to techniques of mitigation there was no one preferred method (KLE, solatia, etc…), but understanding that all are essential in conjunction with a timely and effective IO campaign. Most often a KLE or informal Shura would occur immediately following an incident with the local leaders. The preferred option was always a senior leader who has knowledge and respect for the local population. In many cases it was the battalion commander or other battalion senior leader, in other cases it was a company commander who had the respect of the locals. And the truth is always the best course of action (even if the incident was negligent). This shows them that CF and ANSF can be trusted. But it must always be someone with a level of authority over the situation. Additionally, another common theme was immediate notification and involvement of the provincial governor and other local leaders. They can often calm the situation and may be the best to counter any enemy propaganda. Timeliness was always an issue and sometimes with the distances and restrictive terrain getting senior leaders or government officials to the site was difficult to accomplish. And dynamically tasking rotary wing assets was always difficult to do with minimal lead time. When available, rotary wing assets can be of great assistance to mitigating CIVCAS incidents in a timely manner. Additionally, the timeliness of solatia payments was also a concern. Many leaders would have preferred to see additional pay agents available for rapid payments to the families of the victims. However, it is important to note that investigation must always be conducted in order to prevent false claims for future operations. Otherwise it can turn into a perception of “free money” anytime an operation occurs.

When it came to conducting the investigations units reported the benefit of always conducting a joint investigation along with the ANSF. The investigation should be detailed and complete. Units should always have cameras available for photogrpahic evidence. Also, showing dead fighters with their weapons (especially if larger than an AK-47) is essential to prove that they were in fact a fighter and not an innocent civilian. Often, the local population will not believe that a dead fighter was in fact an insurgent unless shown proof. Other items that may need to be declassified and presented to the local leaders would be any gun camera footage and any ISR coverage that may show the incident.

Information Operations: Most units reported observing that the insurgents had a very rapid capability to influence the population negatively towards a suspected incident. Following an incident Coalition and ANSF forces need to begin an IO campaign immediately. This can range from KLEs, radio and television broadcasts, apologies (if warranted) and leader engagements. Most units reported that involving the Provincial Governor and local elders immediately was highly beneficial. If available, getting the Governor or radio or television (where available) was a very effective way to get the message out. Other methods included the use of the Radio In A Box (RIAB). But the IO campaign must be proactive and begin immediately. Many commanders felt that they were falling behind the insurgents in the battle of getting the truth out, and that it is always easier to inform and gain trust as opposed to having to counter lies and then get the truth out.