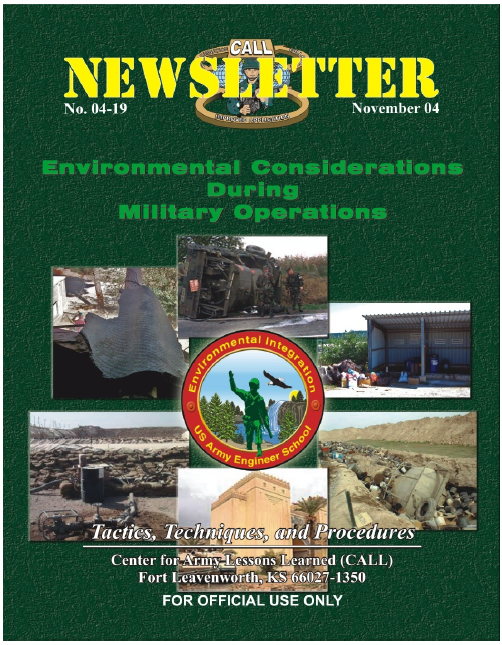 This newsletter does not strive to make readers environmental experts. However, it does emphasize the importance of incorporating environmental considerations throughout the military decision-making process (MDMP). Through a variety of environmental lessons learned, this newsletter provides tactics, techniques, and procedures in an effort to reduce overall environmental risk.

During the first Gulf War, a U.S. unit came under fire from an Iraqi mechanized unit that took up a defensive position in a refinery/processing plant. The U.S. unit responded with artillery fire. The 155mm rounds hit and silenced the Iraqi unit; however, the resulting collateral damage caused the unintentional release of a toxic cloud of hydrochloric and sulfuric acids.

The cloud blew over a herd of camels and other livestock, causing their deaths. A post-operations investigation determined that the consequences would have been disastrous if friendly forces or non-combatants were downwind of the refinery. While chemical protective gear will protect soldiers from biological and chemical agents, they offer no protection against many toxic industrial chemicals (TICs)/toxic industrial materials (TIMs).

Depending on the type and quantity of TICs/TIMs, a deliberate release could present either a short- or long-term hazard at the release site and for those within the downwind chemical plume. They would disperse similarly as chemical warfare agents. The vapors tend to remain concentrated downwind from a release point and in natural low-lying areas such as valleys, ravines, or manmade underground structures.

1. The commander and staff must conduct an intelligence preparation of the battlefield (IPB) during the mission analysis phase of the military decision-making process (MDMP). (The IPB defines the battlefield environment and considers all risks.)

2. Fire support officers must address the hazards associated with TICs/TIMs during their targeting procedures.

3. Units must address the hazards associated with TICs/TIMs in unit SOPs and operations orders.

During operations in support of the war on terrorism, the United States hired a local national contractor to haul waste oil from U.S. forces’ positions. The contractor dumped the oil in a local landfill and sold the barrels. Lack of direct oversight of the contractor resulted in a claim by the host nation for clean-up compensation of $1.25M.

The U.S. Government should have hired a reputable contractor to dispose of the waste oil IAW applicable disposal standards, usually host nation or U.S. standards.

Contracting representatives and contracting officers in theater must ensure contractors are supervised for compliance of the contract terms.

Units must remain aware of contractor personnel working in their area. If they see contractors performing illegal, improper, or unethical actions, they should inform their command and the local contracting agency.

1. The contracting officer should include the proper procedures for waste removal into the contract statement of work.

2. The contracting officer’s representatives, occasionally the unit receiving the services, must ensure proper execution of the contract statement of work.

3. Unit leaders must remain cognizant of contractors working in their area and report all incidents that create potential safety, health, or environmental risk.