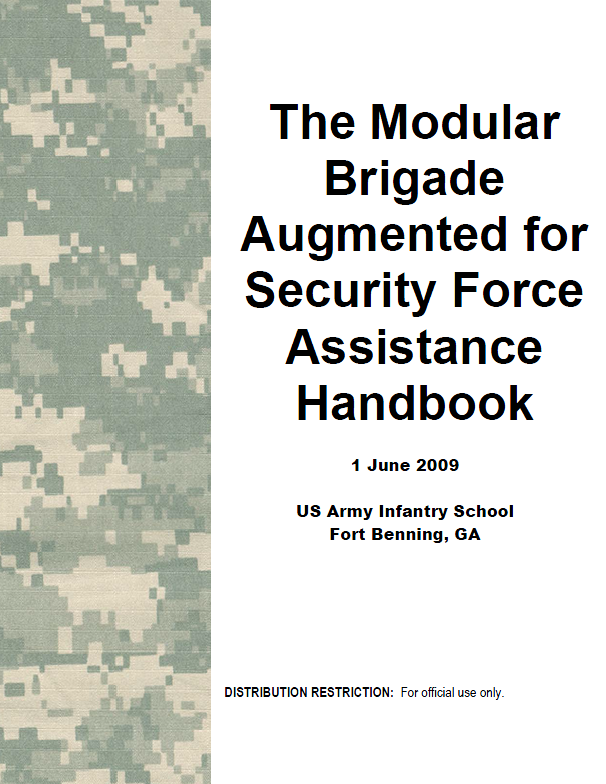 The Modular Brigade Augmented for Security Force Assistance Handbook is designed as an assessment tool for brigade-level leaders as they prepare to train their BCT on the Security Force Assistance Mission. It serves as a guide for the most immediate challenges that Modular brigades will face, and as a catalogue of recently approved doctrinal literature available for commanders and staffs to access and apply.

Chapter One presents methodologies for task organizing and suggests a baseline augmentation that a BCT may require for an SFA mission. Chapter Two provides various assessment tools to evaluate the capabilities of Foreign Security Forces and to plan for their improvement. These assessment tools are drawn from current doctrine, operational units, professional journals and lessons-learned. Chapter Three describes how the BCT implements partnering, augmenting, and advising. Chapter Four summarizes how the BCT fits into the SFA strategic framework.

COMMONALITIES OF PARTNERING AND ADVISING

3-5. Partnering and advising share the core principles of empowering as well as working by, with, and through a FSF. The majority of FSA missions for BCTs will require combinations of partnering and advising with augmentation of FSF units or U.S. forces based on the situation. Unit partnerships do not replace advisor roles or functions. However, if partnering and advising are used in combination, it forms a three-part relationship among FSF, advisors, and the partner units. Partner units should look to the advisor to identify, shape, and facilitate operational partnering opportunities and training events. Both partner and advisor units must build rapport with, demonstrate their value to and have credibility with FSF leaders to varying degrees so that they can influence their counterparts to accomplish SFA missions. In short, units must be prepared to execute both tasks during an SFA mission because each task mutually supports the other and are often combined in multiple areas at the operational and tactical levels.

COMMON MAJOR CONSIDERATIONS OF PARTNERING AND ADVISING UNITS WHEN WORKING WITH FSF: